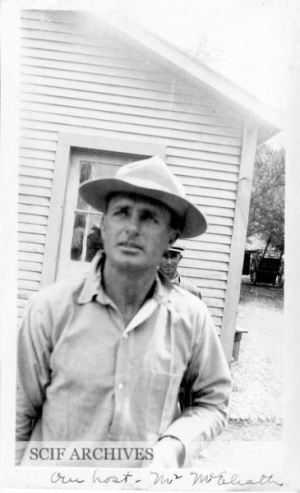 McELRATH, Clifford (1891-1977)[SS#552-03-5638], California-born, the youngest of eleven children raised on a small Temescal ranch. McElrath, a University of California Davis graduate, was hired by Arthur Caire as assistant superintendent for the Santa Cruz Island Company in March 1919. Five months later, he was promoted to superintendent, a position he held through September 1921. A January 1921 newspaper item reported:

“McElrath, superintendent of Santa Cruz Island, has been under sentence of death for several weeks. Austrian pirates from San Pedro are threatening his life. The young superintendent is an excellent shot and has complete faith in his ability to protect himself.”

“A young foreman for about three years, Clifford McElrath, inexperienced in island ways, insisted the cattle must have salt licks. My father [Frederic Caire], somewhat amused and exasperated, gave in. As he well anticipated, not one bovine or sheep tongue stretched out for any of the salt.” [1993: 72].

McElrath departed the island for a position on a large cattle ranch in Chihuahua, Mexico. According to Pier Gherini [1966], when the Gherinis acquired the eastern portion of Santa Cruz Island in 1925, McElrath was consulted by Ambrose Gherini regarding operations on the east end of the island. “On the advice of McElrath and others, it was decided to forego the dual [cattle and sheep] operation, and to confine our activities to the raising of sheep and wool.”

Forty five years after his departure from the Main Ranch, “Mac” put to pen many of his memorable ranching experiences which include descriptions of the birds and animals of Santa Cruz Island, outlaw horses, stampedes, round-ups, and matter of fact accounts of bygone island life. His book, On Santa Cruz Island, won a 1968 Western Book Award.

In his 8th decade, McElrath and his wife, Marguerite, moved to Jackson, California, where Mac got his real estate license at age 80. He rode horses through age 82. McElrath died April 4, 1977. He was cremated and his ashes scattered on a large ranch in Amador County where, as he requested: “the cattle and coyotes could walk in his dust.”

October 19, 1921 [SBMP]: “Island superintendent takes place on Hearst's big Mexican ranch. Clifford McElrath, for several years superintendent of Santa Cruz Island, has taken a similar position on the great William Randolph Hearst ranch in Mexico. He has been succeeded at the Santa Cruz Island ranch by A. Revel, a former superintendent of the island property. Mr. Revel was an officer in the Italian army and when Italy entered the world war he with his assistant, also an Italian officer, responded to the call to the colors. The superintendent of the Santa Cruz Island Co. not only has charge of a ranch 35 miles long and covered by vast herds of sheep, cattle and hogs, but he is the general manager of a shipping line with one schooner plying between Frey's Harbor and the main land and the commander of a small but active army whose duty is to suppress the activities of market fishermen who look up to the island for free supplies of fresh beef, mutton and pork.”