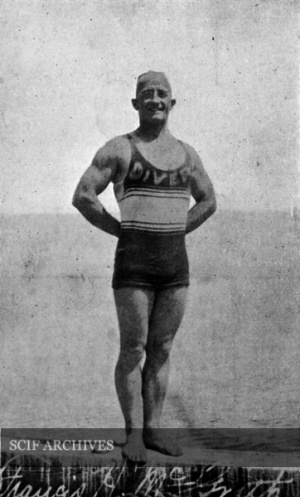 McGRATH, Francis H. “Frank” (c. 1880- ), Pennsylvania-born [1940 census] swimmer, diver, water sportsman, instructor and one-time Harbor Master at Avalon, Santa Catalina Island. He was referred to as a 'Soldier of Fortune' in 1935, having served in:

April 7, 1926 [TI/Avalon]: “Francis McGrath, one of Avalon's famous divers, is again on the island after spending the winter in Florida.”

May 11, 1927 [TI/Avalon]: “Now is the time. Learn to swim. Francis H. McGrath announces the commencement of his 24th season at Catalina. Instruction in swimming and diving. I specialize on timid beginners and guarantee results. At S.C.I.Co. Bath House or Sandy Beach. Special rates before the busy season.”

June 24, 1931 [TI/Avalon]: “There were a few non-members of the yacht club with their yachts scattered along the coast and in Avalon Bay. One of these yachts lost her propeller and had to have a diver recover it. Secretary Abbott at the Catalina Island Yacht Club called up Francis McGrath, who did the job quickly and everybody was happy again after the propeller was reset on its shaft.”

August 12, 1931 [TI/Avalon]: “Frank H. McGrath, former Harbor Master, brought to gaff the largest marlin swordfish ever caught here with rod and reel, weighing 446 pounds, while fishing with Capt. J. O'Leary on August 6th. The fish put up a battle lasting one hour and thirty-five minutes, and leaped out of the water eighteen times before it was successfully gaffed. The previous record for marlin swordfish taken in Catalina waters was held by J. R. White, who, in 1930, landed a fish weighing 368 pounds. In 1924 J. Van Dine brought in a specimen weighing 430 pounds, but this fish was disqualified owing to the fact that one of the party on board Angler Van Dine's fishing launch shot the fish in his haste to end the battle and bring the catch back to Avalon.”

November 28, 1935 [TI/Avalon]: “Francis McGrath is a man whom all know but is very seldom seen by his most intimate friends. I had the pleasure of being the honored guest at a dinner given by “Mac”, which he himself prepared. He is an excellent cook. A confirmed bachelor, he loves to be alone, but enjoys an occasional visit from his many friends, who drop in just to say hello. Mac has had a very interesting life, and may be called a 'Soldier of Fortune'. He enlisted in the Spanish American war with Roosevelt's Rough Riders; was in the Philippine insurrection, also in the Boxer uprising in China; was with General Pershing's expedition into Mexico; enlisted April 7, 1917 in the World War; was commissioned captain in the 301st Tank Corps; was later transferred to the gas inflame regiment; is a professional swimmer and diver, and was at one time Avalon's Harbor Master. A record of which to be proud, indeed. He does not elaborate on his 'war' history — and is just one of the boys.”