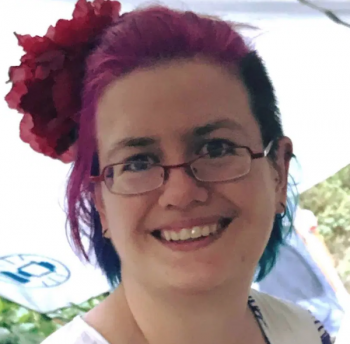 McLAUGHLIN, Carrie ( -2019), was one of the casualties of the fire aboard the dive vessel Conception at Santa Cruz Island on September 2, 2019.

September 5, 2019 [laist.com]: “ Kristian Takvam was a passenger on the Conception, according to his father. He worked for Brilliant, a web company that offered courses in math, physics and computer sciences. He was on the trip with a work colleague, Carrie McLaughlin, the company confirmed Wednesday. "The loss of Carrie and Kristian is deeply heartbreaking for all of us at Brilliant," CEO Sue Khim said in a statement. "Carrie and Kristian were incredible friends and colleagues who brought immense passion, talent, leadership, and warmth, and they will be missed dearly. Our hearts are with their families and friends." ”

September 6, 2019 [Palo Alto Online]: “Palo Alto High graduate dies in Conception boat fire Caroline 'Carrie' McLaughlin was a software engineer, watercolorist. A Palo Alto High School graduate is among the 34 people who died in the Conception boat fire in southern California on Labor Day. Caroline McLaughlin, 35, was one of the people the Santa Barbara County Sheriff's Office identified during a press conference on Friday morning. She was aboard the 75-foot commercial diving boat that caught fire at around 3:30 a.m. early Monday near Santa Cruz Island and sank down about four hours later. Of the 39 passengers on board, five people were rescued, 33 bodies have been found and one person remains missing, sheriff's officials said. Santa Barbara County Sheriff Bill Brown said Friday that 18 of the deceased have been positively identified to date. The sheriff's office released nine names on Friday morning and is waiting to notify the next of kin of the other nine before their names are publicly announced. McLaughlin was among the nine named at Friday's press conference. Also in the group was Raymond Scott Chan, a 59-year-old resident of Los Altos. He was a physics teacher at American High School in Fremont, the Fremont Unified School District said in a tweet on Tuesday. Chan's daughter Kendra Chan, 26, of Los Altos, also perished in the fire, according to Palo Alto Online's sister newspaper the Mountain View Voice. She graduated from Mountain View High School in 2011. Many of the deceased are from Santa Cruz, San Jose and the Bay Area, according to sheriff's officials. McLaughlin graduated from Paly in 2001 and the University of California, San Diego with a Bachelor of Arts in Interdisciplinary Computing in the Arts in 2005, her Facebook profile states. She spoke Brazilian Portuguese and Japanese and had a love for dance. She lived in Oakland and was a senior software engineer at San Francisco-based Brilliant.org, a website and online community that offers math, science and engineering courses. She was also a watercolorist who shared her works through the website carrielicious.com. The sheriff's office is now investigating the cause of the fire with assistance from the National Transportation Safety Board, the United States Coast Guard, the Bureau of Alcohol, Firearms, Tobacco and Explosives, and other agencies. While the investigation is ongoing, Brown said Friday that early indications suggest that all the victims died from smoke inhalation. The burn damage, he said, appears to have occurred after they had already died. Brown said the sheriff's office does not plan to perform autopsies on the recovered victims, noting that autopsies are not expected to change the pathologist's determination and that they would delay the process of releasing remains to family members. "We have done external determinations, we have done toxicology tests, we have done a review of this entire process by our pathologist. ... Our pathologist is convinced, without having done the autopsy, that these victims were victims of smoke inhalation," Brown said.”