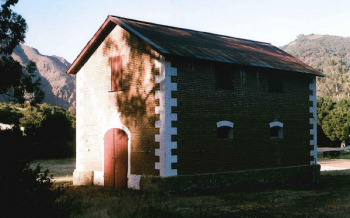 Milk Cow and Stallion Barn, Santa Cruz Island is located at the west end of the Main Ranch. It was built of island-made bricks under the direction of Justinian Caire. The first floor of the building is divided in half, with the western half containing two stalls used historically for holding stallions. The eastern half was built with stanchions for holding the heads of milk cows while they were being milked. The second floor loft has hatches for dropping hay down into feed bins below.