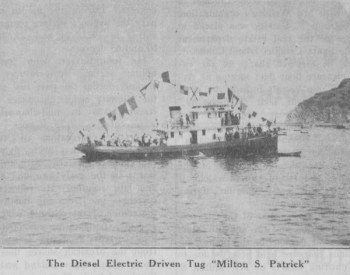 September 8, 1926 [TI/Avalon]: “The Milton S. Patrick. Manager of local fleet of W.T.Co. and Mayor of Avalon receives signal honor. So successful has been the performance of the big Diesel electric tug Milton S. Patrick, that Mr. David P. Fleming, Secretary-Treasurer of the Wilmington Transportation Company announced Saturday that the Company had ordered lumber for another similar vessel, to be completed in six months. The Milton S. Patrick visited Avalon Bay a few days ago on its trial trip. It was also announced that the Wilmington Transportation Company, of which William Wrigley Jr. is chairman, has planned for the construction of a new tug each year for the purpose of towing barges from Catalina Island to the mainland — barges loaded with crushed rock and products of mineral mines... The Milton S. Patrick was designed and built by Captain William Muller of Wilmington. The tug is 95 feet in length, 22 feet 6 inches beam, and draws 13 feet of water. The engine room equipment consists of two full diesel air injector engines of 300 h.p. at 450 r.p.m., which are directly connected to a Westinghouse generator of 175 h.w. The propelling equipment consists of one Westinghouse double armature, marine type motor of 450 h.p., at 130 r.p.m., turning a Lambie propellor 8 feet 6 inches diameter by 8 feet pitch. There are three control stations, two in the pilot house and one aft on top of the engine house. The steering is both electric and hand. The control system is known to marine engineers as the "Ward Leonard system of pilot control". The captain's room of this up-to-the-minute tug, is aft of the pilot house, and the chief engineer's room is located on the port side of the main deck. The galley is equipped with a Westinghouse electric range. All of the electrical gear was designed and built by Allen Cunningham of Seattle. The deck equipment consists of a warping winch forward, with a two-speed Cunningham capstan on the starboard side aft. The Milton S. Patrick is the eighth towboat to be added to the Wilmington Transportation Company's fleet, and the boats are in daily operation in Los Angeles Harbor and Catalina Island waters. The following is the list: Vivo, Listo, Jimmy-K, Captain William, David P. Fleming, D. M. Renton, and the John N. Stewart. The Fleming and the Renton are Diesel sister ships of 350 h.p. and the Stewart and Patrick are also "sisters", with Diesel 430 h.p. electric drives. For the past five years Mr. William Wrigley has adopted the policy of naming the new tugs as they are launghed after one of the members of his efficient organization. The name of the tug to be completed in 1927 has not yet been announced... ”