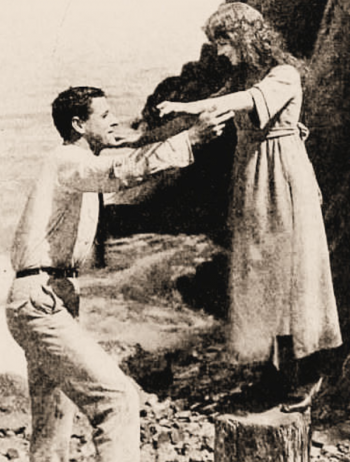 Miss Adventure was a five-reel adventure movie directed by Lynn F. Reynolds filmed by Fox Film Corporation on Santa Cruz and Santa Catalina Islands. It was released on May 4, 1919.

The leading lady, Peggy Hyland, had a close call during the filming on Santa Catalina Island when her car went off a cliff into the sea.

June 5, 1919 [Stockton Independent]: “Peggy Hyland in a sea story—and an exciting sea story it is. Under the title of "Miss Adventure," it will be shown at the Colonial theatre again today. The story is one that should give ample room for all the dainty and sprightly acting of which Miss Hyland is capable. The heroine's father is killed by a mutinous crew and she is adopted by an old sea captain. The pranks she plays as she grows up, and her unfailing good-nature, make her beloved by all in the fishing village where she lives. But a nephew of the captain, fearing she will get the captain's fortune, has her kidnapped, and soon Peggy finds herself on a deserted island. But the cabin boy of the ship on which her father was killed, now grown to manhood, is searching for her, and when he finds her he tells her she is an heiress to a great fortune. When they get back to the mainland she rewards him with her love. The play is tremendously exciting throughout, and has some beautiful scenic effects.”