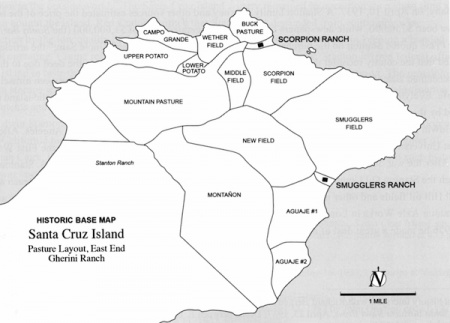 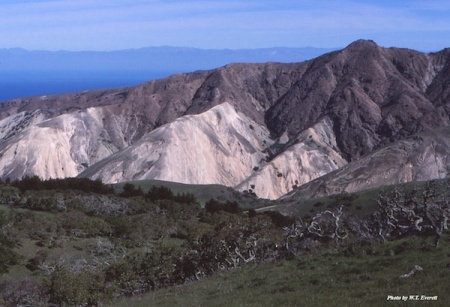 North side of Main Ridge west of Montañon,
the narrowest part of the island.
Santa Cruz Island, Symmes, 1922 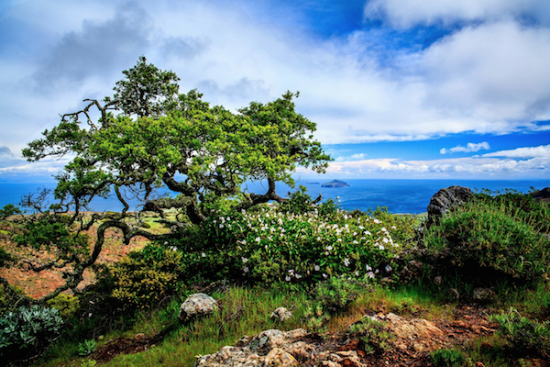 Montañon, Santa Cruz Island, formed the approximate property ownership boundary between the eastern end of the island and the western 9/10th of the island in the 1925 partition lawsuit between the Caires and Gherinis. The Montagñon was described by Clifford McElrath as:

“a high volcanic ridge that cuts across the main east and west axis of the island like the arms of a cross. Getting over the Montañon is a rough slippery climb over volcanic rock ”

[Symmes & Associates 1922:9] The Montañon is a rocky volcanic ridge extending across the island from Coche Point on the north to Sandstone Point on the South. Its south western slope is rocky, steep and precipitous with little vegetation on the upper portions, while its northern slope is well covered with scrub oak and chaparral to its summit which rises to an elevation of from 1700 to 1770 feet. On the south, the main ridge slopes and fans out in a series of long open and generally well grassed cuchillos or small ridges to the ocean.

[McElrath 1967: 68]. It must be crossed either on foot or horseback to reach the out ranches at Scorpion Harbor or Smugglers’ Cove.