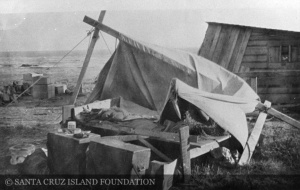 Morse Point, Santa Cruz Island, located on the south side of the island, is the point of land which separates Pozo Beach to the west and Playa Large to the east. It is the site of an historic fish camp where a former wooden shack was located.

“located on Morse Point on the south side of Santa Cruz Island. Station is about 200 meters to the north of main point and on an 80-foot bluff.”

A standard disk set in concrete marks the station. The horizontal coordinates were established by classical geodetic methods and adjusted by the National Geodetic Survey in June 1996. This place name appears on the Santa Cruz Island Sheet A topographic map.