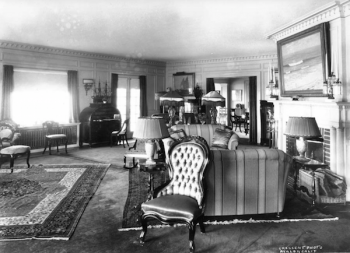 Mount Ada, Santa Catalina Island, also known as Mount Buena Vista, is the hill to the south overlooking Avalon Harbor. William Wrigley, Jr. chose the site for the location of his colonial-style home, which was constructed between 1920 and 1921 for his wife, Ada (1868-1958), near the top of the hill. He named it for his wife, Ada Elizabeth Wrigley nee Foote. The site has a commanding view of the bay and town of Avalon from the east rim of the bay, 350 feet above town. It was designed and built by building contractor, David M. Renton, with six bedrooms, a drawing room, billiard room, sunroom, dining room, office, and terrace porch. William Wrigley, Jr. died just over a decade after the house was completed. His wife continued to use the house for 37 years, until the late 1940s. Following Ada Wrigley’s death in 1958, the property was managed by the Santa Catalina Island Company and used for meetings and events.

The property was donated to the University of Southern California in 1978 and used as a conference center for several years. In 1985 the property was placed on the National Register of Historic Places. That same year it was leased to a local corporation and transformed into the Inn at Mt. Ada. Several fireplaces were added and a new roof was installed.

January 3, 1922 [TI/Avalon]: “Mr. & Mrs. William Wrigley and party arrived on the island Wednesday, and were immediately taken to their home, Mt. Ada, on the east Avalon terrace.