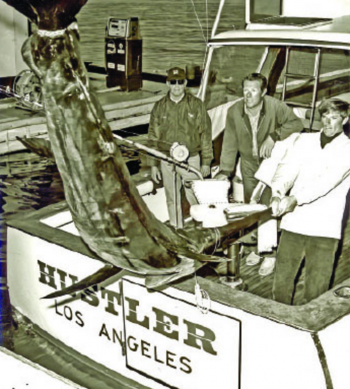 Ted Naftzger, center, aboard his 36-foot Ribovich he named Hustler

Ted was a world class sports fisherman and in 2002 was inducted into the International Game Fish Association Hall of Fame. He was a founding member of the Channel Islands Broadbill Tournament. He was also President of the Tuna Club of Avalon, a founding member of both the Channel Island Broadbill Tournament as well as the Lizard Island Fishing Club. Known for his legendary sword fishing expertise, Naftzger is believed to have caught more broadbill on rod and reel ~ 49~ than any other person in the world. He said of his daytime sword fishing — the most difficult time to fish — that it was ‘the only really interesting and sporting way to catch them.’ He added ‘If it were easy I wouldn’t do it.’ Naftzger still holds a Tuna Club record set in 1970 for a 503-pound braodbill swordfish caught on an 80-pound dacron line.

He was also a well known and highly respected numismatist for over 60 years.

Ted Naftzger married Pauline Crowe and they had three daughters:

NOTE: The Ribocivh vessel, Hustler, owned by Ted Naftzger, was built in 1953 as Vael. It was the boat company's ninth vessel. After many owners and name changes [Vael; Hustler; Nan-Sea; Andale; Lady Iris; Renegade; Bahari], the vessel sank off Bimini, Bahamas en route to Chub Cay in June 2000. Chub Cay is a small island located 200 miles southeast of Fort Lauderdale, Florida, in the Berry Islands chain of the Bahamas. It has a population of 46.