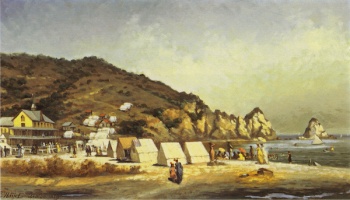 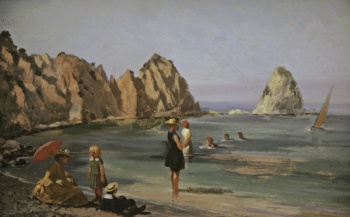 NARJOT, Ernest Etienne (1826-1898), artist born in St. Malo, France and raised in Paris by artist parents. He received formal art training there but was distracted from that pursuit by his interest in gold mining, which lured him to America. Narjot participated in the 1849 California gold rush, but was a mining failure. By 1865, he settled in San Francisco where he had a studio on Clay Street and painted landscapes, portraits, and sketches of gold miners and Indians and did murals and frescoes for churches and public buildings. A major achievement in his career was the commission to decorate the ceiling of Leland Stanford's tomb. While working on this project, he splashed paint in his eye which led to blindness. By the 1880s, he was considered one of California's foremost painters and also illustrated books of early California life. He died impoverished, and many of his works were destroyed in the San Francisco earthquake of 1906. Today his works are in the collections of the Los Angeles County Museum of Art, the Oakland Museum and the Bancroft Library at the University of California, Berkeley.

In the late 1880s, Narjot was one of the first professional artists to visit and paint on Santa Catalina Island.

October 14, 1889 [SF Chronicle]: “Mr. Narjot has finished the portrait of his grandchild, begun some weeks before he went south for the summer. He brought back many delightful sketches from the resorts on the coast... ”

August 25, 1898 [SF Call Bulletin]: “Oldest California Painter Died Yesterday. There passed away yesterday in this city an art veteran whose name is familiar to all and whose work has been widely commended. Ernest Narjot, the oldest painter in California, was born in St. Malo, France in 1827, and began his his art education at a very early age, attending a Parisian school before he was 16. He arrived in this city exactly forty-five years ago, but after a year of spasmodic work with his brush he joined an expedition to Mexico, returning to San Francisco in 1896. Afterward he devoted his himself to his art, and his pictures are well known both in California and Mexico. Narjot was later afflicted with paralysis and partial blindness. Narjot passed away at the home of his daughter and son-in-law, Mr. and Mrs. Howard. He leaves a widow, two daughters and a son to mourn his loss. The funeral services will be held tomorrow at Notre Dame de Victoires Church. ”