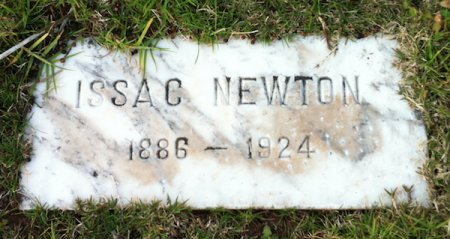 NEWTON, Isaac (1884-1923), California-born seasonal employee of the Santa Cruz Island Company from 1916-1920, and caretaker at Pelican Bay for Ira Eaton for a year. Clifford McElrath recounted [1967]: “There was the time that Ike Newton’s horse fell on him and broke Ike’s collar bone. It was winter and we had sent the schooner Santa Cruz to San Pedro to have the bottom scraped and painted. Ike’s accident happened the day after she left. I gave Ike first aid. I had men out riding trying to hail a fishing boat or any sort of craft that we could use to take Ike to Santa Barbara. For ten days, Ike walked the floor at night. A broken collar bone is painful. Ike lost about 20 pounds. Finally [Ira] Eaton put in an appearance and I sent Ike to town. Ike returned, gained back his lost weight, and in a few days was back at work.” Newton was treated in Santa Barbara by Dr. Ben Bakewell, and the Santa Cruz Island Company paid the expenses, “lest he fall into the hands of some ambulance chasing attorney.”

In 1923 at age 39, Isaac Newton drowned with Big Jerry Shively at Santa Cruz Island between Potato Harbor and Scorpion Anchorage during a storm. Fellow fisherman Frank Nidever had been reported lost in a fishing boat out of Santa Barbara owned by Frank Larco, and Shively picked up Newton at Pelican Bay to help him search for Nidever in the O.K. The O.K., in turn, was pounded to pieces and both Jerry Shively and Isaac Newton were drowned. The February 20, 1923 captain’s log of the schooner Santa Cruz records: “Libbey found Newton.”

February 18, 1923 [SBMP]: “Fear felt for fishing vessel. Another Larco boat with two Santa Barbara men missing for week. Failure of the fishing boat, O.K., commanded by Captain Jerry Shively, to return to port after an absence of a week is causing some apprehension along the waterfront, it became known yesterday. At the offices of Larco Brothers, owners of the O.K., it was said yesterday that ‘Big Jerry,’ as Captain Shively is known among fishermen, put out from here a week ago yesterday with the rest of the Larco fleet to search for the ill-fated Eagle in which Captain Frank E. Nidever is believed to have gone to his death. At Pelican Bay, Santa Cruz Island, he picked up Isaac Newton, employed at Captain Ira Eaton’s camp, and sailed away. That was the last seen of either Shively, Newton, or the O.K. Frank Larco said the failure of Captain Shively to report was incomprehensible as there had been no storm in the channel since his disappearance. He said no search had begun for the O.K. and it was possible that it was lying safely at anchor, though possibly disabled, in some bay or inlet on the windward side of the islands. A later report from the Larco offices indicated Frank Larco might begin a tour of the islands in search of the missing fishing smack today.”

February 22, 1923 [LAT]: “Santa Barbara. Search of the Channel Islands shores for the bodies of Captain Frank Nidever of the missing fishing smack Eagle and Captain Jerry Shively of the missing craft O.K., has been resumed because of the finding of a body in Scorpion Bay on Santa Cruz Island of the body of Isaac Newton, caretaker of the Captain Ira Eaton camp at Pelican Bay. Newton set off on the O.K. with Captain Shively to hunt for Captain Nidever, who has been missing since January 29…”

February 22, 1923 [Los Angeles Evening Express]: “Santa Barbara, Feb. 21—Investigation of an alleged war between Santa Barbara channel fishermen, involving racial hatred, "professional jealousy," rum-running and other factors, will be conducted here by officers following the finding of the mutilated body of Isaac Newton on Santa Cruz Island. The body was first thought to be that of Capt. Frank Nidever, missing since January 29, but was identified as that of Newton by relatives. Newton's body showed every indication of foul play, officials stated, despite a coroner's jury verdict that death was due to "accidental drowning."”

February 25, 1923 [SBMP]: “The mystery of the disappearance of Captain Frank Nidever, in the boat Eagle, and of Big Jerry Shively in his O.K., remains unsolved, while one of the Larco brothers returned yesterday with a heavy catch — but no tidings of the missing ones, and with no discoveries of the wreckage of either of the boats. The return of the fleet, however, caused an indefinite postponement of a voyage by representatives of the district attorney’s office with the Larco brothers to seek further information in the strange disappearance of the two men, and in the death of Isaac Newton, picked up dead floating in the water off Santa Cruz Island. When the officers will take the trip is not now announced, but that a search for the bodies of the missing men will be continued is certain.”