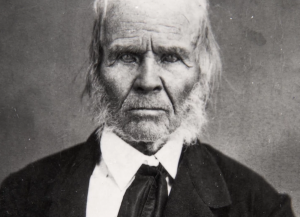 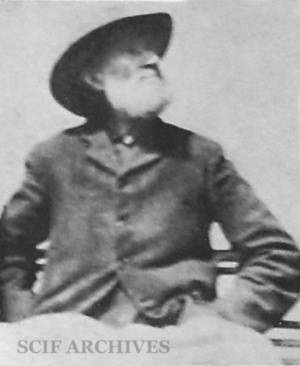 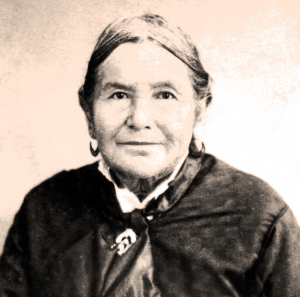 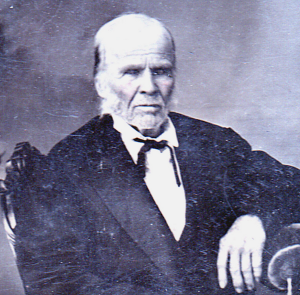 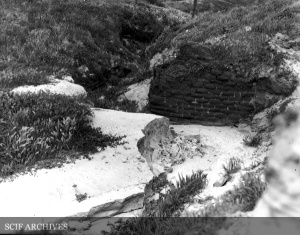 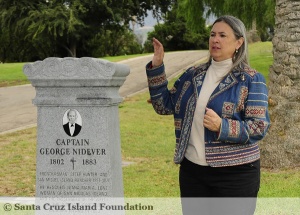 Marla Daily unveiling a monument honoring sea captain George Nidever. The Santa Cruz Island Foundation placed a headstone on his grave, unmarked for over a century. Sinforosa, his wife, and sons Mark and Ramon, are also in the same plot. The period headstone was designed by the great Santa Barbara stone mason, Osi DaRos. 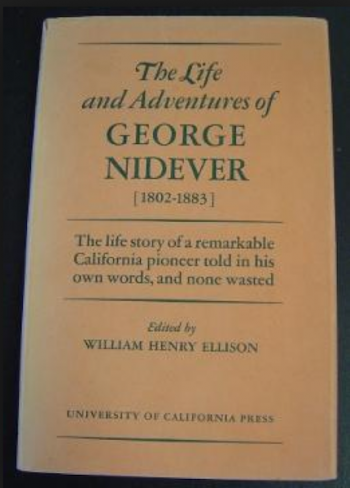 NIDEVER, George (1802-1883), the son of George Nidever (1772-1850) and Christina Funkhouser, was a Tennessee-born frontiersman, mountain man and trapper who came to California with the Walker party in 1834, the first party to cross the Sierra Nevada into California. Nidever settled in Santa Barbara to pursue otter hunting, stock raising, and sheep ranching.

“…8 or 10 days after I arrived here Sills [Sill] and I went to Santa Rosa Island. We had no boats so we were obliged to hunt from land. We went over about May of 1835. Two weeks later Sills was taken sick and returned to Santa Barbara. I remained about six weeks longer and killed in all 8 or 10 otters; Sills having got none. I had with me a Kanaka Indian, employed to swim out for the otter killed; at $16 a month.”

In 1840 Nidever bought a large conspicuous house on the waterfront on Burton Mound.

On January 27, 1842, as an adult, Nidever was baptized at the Santa Barbara Mission, and shortly thereafter, on February 13, 1841, he married María Sinforosa Ramona Sanchez (1812-1892), whose family owned the 14,000 acre Rancho Santa Clara Rio del Norte, and who had grown up among the best of Santa Barbara society. The Nidevers had six children. They lived on Burton Mound for about ten years, until they sold the property in 1851.

In 1850 or 1851, Samuel Bruce sold his right, title and interest in San Miguel Island to Captain George Nidever.

In 1853 when it was discovered the now legendary “lone woman” had been left on San Nicolas Island, Nidever sailed to the island on an otter hunting expedition, located the woman, and brought her back to his home in Santa Barbara in September 1853.

In December 1853 Nidever rescued some of the stranded passengers from the wreck of the Winfield Scott on Anacapa aboard his fishing boat Cora.

In May of 1863, Nidever appeared before the 4th District Court in San Francisco and successfully bid $1800 to satisfy a debt of Samuel Bruce that was secured by a half-interest in San Miguel Island. (In 1863 Bruce made an offer to purchase Santa Rosa Island.)

On June 30, 1863 Captain Nidever purchased interest in San Miguel Island from Samuel C. Bruce at a Santa Barbara County Sheriff’s sale. Bruce needed to pay $1486.57 in debts at the time, and Nidever was the highest bidder at $1800 for “all the right, title, interest and ownership... in and to all the sheep, cattle, and horses upon the said Island of San Miguel, consisting of 6000 sheep, more or less, 125 head of cattle, more or less, and 25 horses. Also the right, title, interest, claim and ownership... consisting of a possessory claim to an undivided half of the said island.” Nidever built an adobe 400 feet above Cuyler's Harbor.

In 1882, James Terry, a private anthropological collector from the east coast, visited Nidever in Santa Barbara and bought a whale baleen hairpin from Nidever that had belonged to Juana Maria, Lone Woman of
San Nicolas Island. Terry’s collections ended up in the American Museum of Natural History, New York.

Pioneer otter hunter George Nidever died March 27, 1883. His wife, Sinforosa, died in 1892. They were originally buried elsewhere, probably in the old Santa Barbara Catholic Cemetery (Cieneguitas), but in 1912 George and Sinforosa were moved to unmarked graves in a family plot in Santa Barbara at Calvary Cemetery. Children Marcos, George Edward, Jacob, and Isabel Tomasa are buried in Calvary Cemetery as well.

In 1878 Nidever dictated his life story to Edward F. Murray, assistant of historian Hubert H. Bancroft. The manuscript was edited in 1937 by William H. Ellison.

Nidever's grave was located, unmarked, in Calvary Cemetery, Santa Barbara in 2008. The Santa Cruz Island Foundation raised the funds to have an upright headstone placed on the grave that commorates not only George Nidever, but also his wife Sinforosa, and two sons, Mark and Jacob, also buried in the plot.

In 1870, Ralph Waldo Emerson (1803-1882) wrote a poem entitled, Courage, about pioneer otter hunter, George Nidever. The poem was widely printed in children's magazines and elementary school books at end of the 19th century. Before his death, Emerson learned that some one in California, reading the essay, found the poem, and knowing George Nidever, took it to the old hunter, “who was astonished and pleased to find that his act of generous impulse, when a youth, was known and celebrated on the other side of the continent a quarter of a century after its occurrence.”

Men have done brave deeds,
And bards have sung them well:
I of good George Nidiver
Now the tale will tell.


In Californian mountains
A hunter bold was he:
Keen his eye and sure his aim
As any you should see.


A little Indian boy
Followed him everywhere,
Eager to share the hunter's joy,
The hunter's meal to share.


And when the bird or deer
Fell by the hunter's skill,
The boy was always near
To help with right good will.


One day as through the cleft
Between two mountains steep,
Shut in both right and left,
Their questing way they keep,


They see two grizzly bears
With hunger fierce and fell
Rush at them unawares
Right down the narrow dell.


The boy turned round with screams,
And ran with terror wild;
One of the pair of savage beasts
Pursued the shrieking child.


The hunter raised his gun, -
He knew one charge was all, -
And through the boy's pursuing foe
He sent his only ball.


The other on George Nidiver
Came on with dreadful pace:
The hunter stood unarmed,
And met him face to face.


I say unarmed he stood.
Against those frightful paws
The rifle butt, or club of wood,
Could stand no more than straws.


George Nidiver stood still
And looked him in the face;
The wild beast stopped amazed,
Then came with slackening pace.


Still firm the hunter stood,
Although his heart beat high;
Again the creature stopped,
And gazed with wondering eye.


The hunter met his gaze,
Nor yet an inch gave way;
The bear turned slowly round,
And slowly moved away.

1850: “This same month [January 1850]… I then went to San Francisco and bought a small schooner of 17 tons burthen, with which I returned to Santa Barbara… Soon after buying my schooner in San Francisco, I bought out the interest of a man by the name of Bruce who had sheep on the San Miguel Island…” [Ellison, William Henry. The Life and Adventures of George Nidever, 1802-1883, Berkeley, 1937, p. 76.]

November 1, 1853 [SDU]: “The wild woman of California — We have heretofore made mention of the existence of a wild Indian woman in Southern California, and the subject account, which we find in the San Francisco Herald, confirms the statement. The Santa Barbara correspondent of that journal writes under date of October 7th as follows:

A short time since I called to see the wild Indian woman. She is living with Mr. Geo. Nidever, an old trapper, who has been on this coast for the last 18 years. She was brought from the Island of San Nicholas (sic), 70 miles distant, and not from Catalina. No person has yet been found that can understand or speak her language...”

April 17, 1858 [Los Angeles Star]: “...The Channel Islands extend from Point Conception to San Diego—the most important of them laying off and forming Santa Barbara county. The first in the chain is San Miguel, which is eight miles long, and affords excellent pasturage. It is occupied by Mr. George Neidiver [sic]...”

September 12, 1859 [SBMP]: “Judge Carrillo, on hearing argument on a motion for a writ of habeas corpus, fixed the bail of John Nidever at $20,000. On examination as to the shooting of George Nidever, who is recovering, warrants were issued for the arrest of William Carrillo, Francisco Leyby, Eugenio Lugo, Jose Maria Gutierres and Manuel Zurita. After the testimony of Dr. Ord, the complaint against Carrillo was dismissed, which honorably freed him from any suspicion of being one of the party who shot Nidever.”

November 7, 1879 [SBDP]: “The Nidever boys started in their little boats for the islands on an otter hunting expedition.”

February 23, 1882 [SBDP]: “…The old captain [Nidever] who found her [Lone Woman of San Nicolas Island] still lives in this place, and is always ready to tell the story in his own graphic manner.”

December 20, 1882 [SBDP]: “Real estate. George Nidever to S. S. Nidever [his wife], all right, title and interest, of any and all property situated in the counties of Santa Barbara or Ventura; consideration, grant.”

March 28, 1883 [SBDP]: “For sometime past George Nidever, one of Santa Barbara’s oldest and most respected pioneers has been very ill and near to death’s door… Mr. Nidever was probably one of the best known men in this county… he has lived here longer than almost anyone else, and was one of the first white men to settle here…”

April 6, 1883 [LAT]: “A pioneer of pioneers in Santa Barbara, George Nidever, passed away a few days ago. Mr. Nidever was probably one of the best-known men in that county… It was Nidever and some of his kinsmen who, many years ago, found the wild woman lost on San Nicolas Island, and succeeded in capturing and taking her back to the mainland… Nidever was an otter hunter by occupation nearly all his life on the Santa Barbara channel…”

July 24, 1887 [SBDI]: “In the matter of Mrs. George Nidever for county aid: It appearing to the satisfaction of this Board that said petitioner is a proper person to receive county aid, it is ordered that the Auditor draw his warrant on the Treasurer, on Hospital Fund, in favor of Mrs. George Nidever for the sum of $8, and for a like amount on the first of each month hereafter until the further order of this board.”

August 13, 1892 [LAT/SB]: “Mrs. Nidever, a very old lady, living on Santa Barbara Street, was found dead in her bed yesterday morning. She was the widow of Captain George N. Nidever, one of the pioneers of this county.”