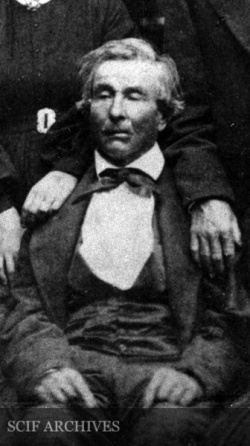 NIDEVER, John Marion (1797-1873), older brother of frontiersman George Nidever, who was born was born August 01, 1797 in Shoal's Ford, presently Bluff City, Sullivan County, Tennessee. He married Mary Polly King Vernon 1821 in Cole County, Missouri. She was born December 12, 1808 in Robertson County, Tennessee. By 1834 they were in Arkansas, and in Texas by 1839.

The Nidevers and thirteen children came to Santa Barbara on a wagon train with oxen in 1852 from Paris, Texas in a trip that took nine months.

November 26, 1870 [SBWP]: “Died. In Santa Barbara at 12 midnight, Sunday, November 12, 1870 at his father’s residence by the seaside, David A. Nidever, aged 36. The deceased was a man of uncommon worth. Such evenly balanced characters are rare. A man of retiring and unobtrusive manners, only intimate friends knew how well he weighed the affairs and duties of life… David leaves a young and devoted wife, with an infant child…”

June 7, 1873 [SBPr]: “On the beautiful sloping hill, beside the sea, two miles or more east of town, in a well-known farm house, died John Nidever, on the last day of May, in the 76th year of his age, after a residence in Santa Barbara of about sixteen years. He passed away from the bosom of his family, of grown up sons and daughters, his wife having died a year or so before…”

November 28, 1956 [SBNP]: “Mrs. Pearl Vance Nidever, 76, of 101 S. Canada St., a resident of Santa Barbara and the Carpinteria Valley for the past 60 years, died in a local hospital this morning following a lengthy illness. Mrs. Nidever was born Aug. 10, 1880, in Desdamona, Tex. She is survived by three children, Mrs. Thomas C. Parker of Ventura, Mrs. W. K. Aldrich of Santa Barbara and Gayle W. Vance of San Diego; one brother, Thomas Hawkins of San Francisco; two sisters, Mrs. Augusta Williams of Summerland and Suzanne Careaga of Los Alamos; one grandchild and one great-grandchild of Bakersfield... Burial will be in Santa Barbara Cemetery.”

June 4, 1873 [SBMP]: “John Nidever. On the beautiful sloping hill, beside the sea, two miles or more east of town, in a well known farm house, died John Nidever, on the last day of May, in the 69th year of his age, after a residence in Santa Barbara of about sixteen years. He passed away from the boson of his family, of grown up son and daughters, his wife having died a year or so before. One incident alone in the life of John Nidever will make his name dear to all loyal people. In the dark days of the Rebellion an agent of Jeff Davis came across from Texas, the native State of Nidever, recruiting soldiers for the Confederate army. There were only about thirty known and reliable Union men in this county at that time, and the prevailing sentiment was overwhelmingly rebel. The feeling was intense when the old man was approached and urged to let his boys enter the ranks of Jeff Davis, and escape being soon drafted into the Union army. The importunate recruiting agent was informed that he must wait a week for his answer. The week passed and they met on the road. The old man sat in his wagon and was asked his decision. He was a man of few words, as all know who were acquainted with him. After a silence of a few moments the old man quietly lifting his hat from his head and swinging it in the air, said in his mild way, "Here goes for the old flag!" All things considered, we know of no incident of the war days more worthy of record. An estimable family is left to bear the name the old man has honored by a virtuous life and a good example.”