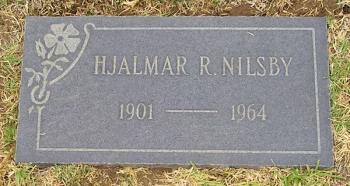 NILSBY, Rudolph “Rudy” Hjalmer (1901-1964), Gherini family employee on the east end of Santa Cruz Island in the 1940s and 1950s. Rudy was the youngest of 11 children born in Missouri of a Swedish mother and Norwegian father. He was a talented musician, heavy drinker, divorced with no children. It was in the 1940s, Judge Pier Gherini first sent Nilsby to the east end of Santa Cruz Island to dry-out and to work. Nilsby worked off and on the island for two decades. Nilsby is buried in the Goleta Cemetery.

August 27, 1956 [SBNP]: “Six county firemen were landed by two airplanes on Santa Cruz Island this morning to fight a brush fire on the southeast side of the island. V. A. Wadleigh, county fire chief, reported at noon that the men believed they would be able to bring the fire under control this afternoon. Wadleigh said planes with another crew of six men are being held in readiness at Municipal Airport should unfavorable conditions cause the fire to spread. It has covered about 25 acres. The fire was spotted last night by the Coast Guard crew on neighboring Anacapa Island. Wadleigh reported there were only two men in the sector of the island where the fire broke out. One of them, ranch foreman Rudy Nilsby, apparently had been injured fighting the blaze, and was to be flown to the mainland this afternoon. The other man is ranch hand Ed Plimer. The property where the fire is burning is operated by Pier Gherini, anta Barbara attorney, for the Gherini family…”