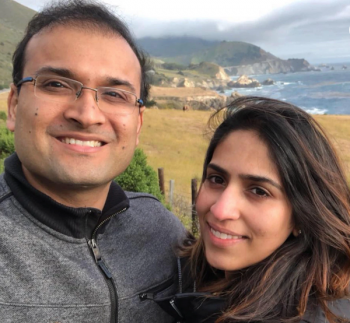 The pair were made for each other, Nirmal’s cousin, Rajul Sharma, told the LA Times in an email. “He found a soulmate in Sanjeeri,” Sharma said. “Their love for each other was apparent even without them speaking about it.” He said his late cousin was sweet, sensitive and an animal lover. “God took them away from us untimely and unfairly, but even he didn’t have the heart to separate them in death,” Sharma said. The tragic victims have yet to be identified by authorities but their names have emerged on social media and through family members.

September 5, 2019 [NDTV]: “VENTURA COUNTY, California (WABC) -- A couple who lived in the New York area were among the 34 people who died in the deadly dive boat fire off the coast of Los Angeles last weekend. Crew members said they tried to save those sleeping below deck before smoke and flames forced them to abandon ship. Two of those victims were Kaustubh Nirmal and Sanjeeri Deopujari, both Indian nationals, who married two years ago. Deopujari -- from Nagpur in central India, was a dentist in Norwalk. Nimral, who grew up in Jaipur, worked in finance. Cousin Rajul Sharma spoke of the couple. "They loved sports adventures and were so full of life," Sharma said. "What happened to them was unbelievable. Imagine being burnt to death, and they were sleeping, defenseless. Imagine what their parents are going through. I am so sorry to write this, but they were too young to die. They had just started their lives" Searchers recovered 33 bodies and continued searching in the waters just off Santa Cruz Island for the lone remaining victim. ”