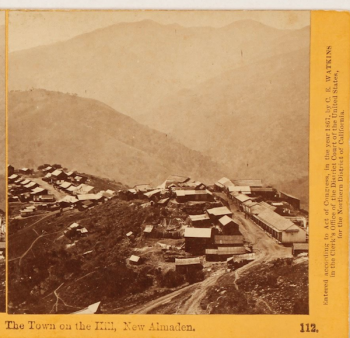 New Almaden Quicksilver Mine was discovered in 1845 by Mexican Calvary Officer and mining engineer, Captain Andres Castillero, original grantee of Santa Cruz Island. Castillero discovered that the red rock used by the local Oholone Indians to paint, was cinnabar, an ore containing mercury. Mercury was needed to process silver in Mexican silver mines. The original mine was registered by Castillero in 1845, and is older than any gold mine in the state. It was named for the famous Almaden quicksilver mines in Spain. The mine operated over a longer period of time (1840s-1940s) and yielded metal of a greater total value than any other metal mine in California. The mine produced over 76 million pounds of quicksilver. Between 1846 and 1849 there were various transfers of shares from one owner to another. The principal participants were Alexander Forbes, Eustace Barron, William Forbes, Eustace W. Barron, Juan B. Jecker, Isidoro de la Torre, Martin la Piedra, Francisco Maria Ortez, James Forbes, Robert Walkinshaw and John Parrott, most of whom were also connected to Barron Forbes and Company of Mazatlan. By 1850 Barron Forbes and Company had acquired all of the New Almaden mine shares. Legal challenges plagued the land from the outset. The United States Supreme Court was concerned with the mine in four separate cases, and ultimately Andres Castillero lost not only the land, but also the mine. Barron Forbes and Company ran New Almaden until 1863 when the Quicksilver Mining Company assumed ownership. The mine is located in Santa Clara County, a few miles south of San José and today is owned and operated by Santa Clara County Parks & Recreation. 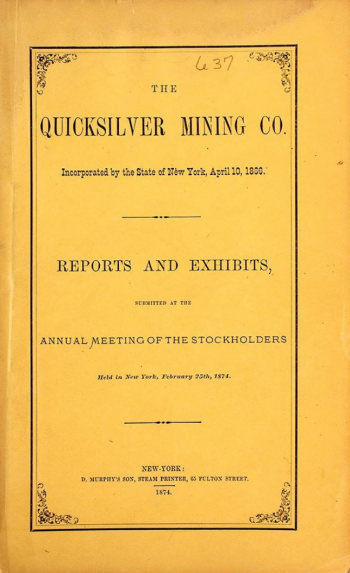 The Quicksilver Mining Company Annual Report for 1874. Originally the New Almaden Mining Co. Incorporated by the state of New York, April 10, 1866. Reports and exhibits, submitted at the annual meeting of the stockholders held in New York, February 25th, 1874 by Quicksilver Mining Company. D. Murphy's Son, steam printer, NY. Original printed yellow wrappers stitched (spine is separated). 37pp. Very good. The mines were located in New Almaden, California. President Daniel Drew reports on their productivity: 11,042 flasks of mercury were produced each weighing approximately 76 pounds. Details production at each of the mines for the company. After being discovered by Indians near San Jose, CA., Andres Castillero, a captain in the Mexican Army, obtained a grant to the mine in 1846 but, occupied with his military duties during the Mexican War, soon sold it to Barron, Forbes Company, an English textile firm based in Tepic, Mexico. The original mining claim was confirmed by the Board of Commissioners that evaluated private land claims in California on January 8, 1856, but continuing litigation in the District Court, The United States vs. Andres Castillero, plagued the company. A claim of fraud was made on behalf of the Quicksilver Mining Company, which had acquired a competing land claim originating in an adjacent agricultural lot to the mine. On appeal to the U. S. Supreme Court the mining claim was found invalid in a decision rendered March 10, 1863. After another related claim was settled, the New Almaden Mine was re-incorporated on April 10,1866 as the Quicksilver Mining Company.

June 2, 1860 [SDU]: “The Island of Santa Cruz. As is well known, the United States Supreme Court recently confirmed the claim of Andres Castillero to the island of Santa Cruz. Of this island the Alta says: ‘It is the largest of the islands belonging to this State, lying about 25 miles south of the shore of Santa Barbara County, which there runs nearly east and west for a distance of about 40 miles. The island is about 20 [sic] square miles or 75,000 acres. It contains no special wealth of soil, timber, grass or minerals, but so large a body of land must possess value for many purposes. The island was once a great resort for seal and sea otter, but most of them have been driven away now. Andres Castillero, the claimant, is the same person who discovered and opened the New Almaden quicksilver mine.”

August 17, 1871 [NYH]: “One of the most important cases yet brought before the Mexican Claims Commission was that of William E. Barron, surviving partner of the firm Barron, Forbes & Co., versus the United States, involving the ownership of the New Almaden quicksilver mines of California. The claimants are British subjects, but at the date of the treaty of peace with Mexico and the cession of California had a commercial council in Mexico, by virtue of which they contended they became entitled to all the rights and immunities of Mexican citizens. The case was referred to umpire, who decided against the pretension of the claimants to Mexican citizenship and dismissed the claim.”

August 17, 1871 [NYT]: “In the Mexican Claims Commission, today, the case of Mr. William E. Barron, the surviving partner to Barron, Forbes & Co., vs. the United States, was taken up. This was a claim involving the New Almaden Quicksilver Mines of California. The claimants are British subjects, and claim on the ground that they are vested with the rights of their Mexican granter in the mines in question. Tenant rights were assigned to their firm some time prior to the 2nd of February, 1848. They complain, first, of the Act of Congress, of March 3, 1851, requiring them to submit new titles to the Board of Land Commissioners, established in California to try titles arising under Spanish and Mexican grants…The case was referred to the umpire, who now decides against the pretention of the claimants to Mexican citizenship and dismissed the claim.”