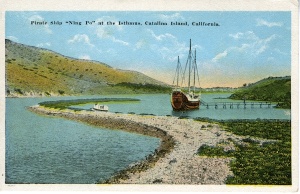 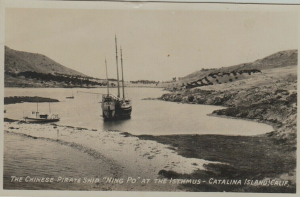 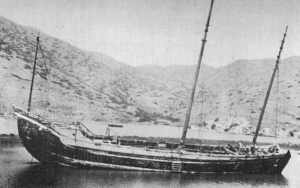 Ning Po (1753-c. 1938) [Ningpo], 138-foot three-masted Chinese pole-junk built in 1753. Washed ashore near Santa Monica in 1912, the junk,recently a smuggling ship, was bought by the Meteor Co. and brought over to Catalina Island to be used as a Chinese restaurant in Lovers Cove. Her last anchorage was at Ballast Point at the Isthmus. She was beached, and over the years she rotted and sank in the sands of the harbor. In 1938 she was finally burned. At the time of her abandonment Ning Po was one of the oldest vessels afloat. Ning Po had a long and tumultuous career:

December 8, 1913 [LAT]: “Long Beach. The Meteor Boat Company of Los Angeles this morning purchased the Chinese junk Ning Po, now on the Craig dock undergoing repairs. The junk will be taken to Avalon, where it will be used next season for exhibition purposes.”

March 3, 1914 [TI/Avalon]: “Charlie Lockard went across Sunday to be gone about a week. He has gone to the purpose of boosting the interests of the Meteor Boat Company. It is intended to bring the Chinese junk Ning Po over about June 1st for an added attraction during the season.”

June 30, 1914 [TI/Avalon]: “The Ning Po is expected to arrive in Avalon waters Tuesday morning. It will probably be located near Lovers’ Cove.”

August 4, 1914 [TI/Avalon]: “Several boat loads of visitors were carried from Avalon via the Ning Po to Pebble Beach…”

August 25, 1914 [TI/Avalon]: “There seems to be an element of unfairness in the demands of some residents, who, a year ago, calmored so loudly for amusements and attractions to draw fast crowds to the island… The announcement was made Monday, that because the Board of Supervisors had tried to handicap the owners of the Ning Po, the Chinese junk, or Oriental Cafe, would be removed to San Pedro next week… Knowles & Lockhard, proprietors of the Ning Po, claim to have lost considerable money on their amusement project.”

March 28, 1916 [TI/Avalon]: “The Chinese junk Ning Po is expected at this port Friday. It is planned to use the craft during the summer season by anchoring it in the bay and using it for the entertainment of glass-bottom boat patrons.”

July 18, 1916 [TI/Avalon]: “Saturday evening opened the Chinese junk and famous pirate ship, Ning Po, to many visitors. Mr. Hoyle, who has spent many years in China, is conducting special parties over this historical pirate craft and giving interesting lectures of the habits and life of the Chinese pirates.”

July 25, 1916 [TI/Avalon]: “Ning Po now on exhibition. This vessel was built in 1753, when tools and workmanship were very crude; built mostly of camphor and ironwood, the latter being proof against the toredo, the little boring worm of the ocean that is so destructive to modern wooden ships… Arrived at San Pedro, Cal., February 19, 1913, having sailed 7000 miles in 58 days. The Ning Po was bought by Americans last year, and is now owned by the Meteor Boat Company. Ning Po is the most interesting bona fide historical exhibit seen here.”

August 8, 1916 [TI/Avalon]: “In the captain’s cabin on board the Chinese pirate junk, Ning Po, now on exhibition in our harbor, are some very fine examples of fuhkein wood furniture, which are over 200 years old. This wood is one of the hardest and heaviest known.”

August 16, 1916 [TI/Avalon]: “A new attraction has been added to the Ning Po. The Chinese have many peculiar secrets, one of which has been used to lure a large school of white sea bass, and they are now making their permanent home under her. They can be seen from her decks at almost any time through the day.”

September 5, 1916 [TI/Avalon]: “Residents and others who have not yet visited the famous Chinese pirate ship Ning Po, had best do so soon, as she will not remain in these waters much longer.”

August 19, 1977 [LAT]: “…Below the old barracks’ west side, the top of a sunken ship, the Ning Po, breaks the surface of Catalina Harbor. It was once a floating restaurant at Avalon and later a museum at ‘Cat’ Harbor before it sank in the 1930s…”