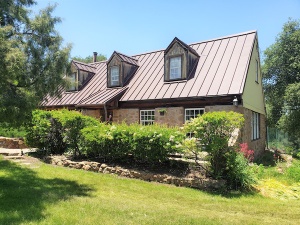 O’DELL, Scott (1898-1989), newspaperman and author of Island of the Blue Dolphins, a novel based upon the story of the Lone Woman of San Nicolas Island, Juana Maria. Scott O'Dell was born on May 23, 1898, in Los Angeles, California, when there were no airplanes, no freeways, and only a handful of automobiles. Travel was by foot, by horseback, by horse-drawn trolleys or wagons. Before long, the family moved a short distance south to San Pedro. For a time, they lived on Rattlesnake Island, across the bay from San Pedro, in a house built on stilts. At high tide, the waves washed beneath it. Scott grew up in California, always living near the ocean and always fascinated by the sea. Tall and slim, he became a track star at Long Beach Polytechnic High School. He attended four different colleges: Claremont College in California, the University of Wisconsin, Stanford University, and the University of Rome. In 1960, with the publication of Island of the Blue Dolphins, his life underwent a sea-change. Scott had come across the story of a girl who lived alone for 18 years on San Nicolas Island while researching his book, Country of the Sun. In the life of the Lost Woman of San Nicolas, he saw a way to make a statement about an issue that was important to him. "Island of the Blue Dolphins," he wrote, "began in anger, anger at the hunters who invade the mountains where I live and who slaughter everything that creeps or walks or flies." The book became a best-seller. It won the American Library Association's Newbery Medal, as well as a half-dozen other awards. Scott O’Dell died in 1989 and his ashes were scattered over the Pacific Ocean off La Jolla, California.