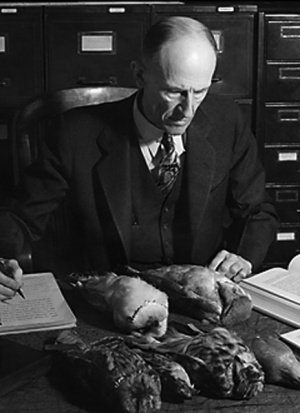 OBERHOLSER, Harry Church (1870-1963) was born in Brooklyn, New York of Swiss descent. As a young man he became interested in birds and turned the study into his life’s work. As an ornithologist, he became Assistant Biologist for the Department of Agriculture, and worked on birds from some of the California Channel Islands, including those collected by Clark P. Streator on Santa Catalina, San Miguel, Santa Rosa and Santa Cruz islands. His work included a revision of wren species for Santa Rosa, Santa Cruz and San Clemente islands. The Dusky Flycatcher (Empidonax oberholseri) is named in his honor. Oberholser was described as “a tall, gangly figure with a fantastic memory” and was known for his extreme self-discipline and high standards. In 1914 he married Marry Forrest Smith, and they had no children. Oberholser named 11 new families and subfamilies, 99 genera and subgenera, and some 560 new species and subspecies. He died in Cleveland, Ohio at age 93.

OBERHOLSER, Harry Church “Born in Brooklyn, New york, June 25, 1870. A well known ornithologist, one of the most eminent and active systematic students of birds of the present time. He has published a large number of critical papers and revisions of groups and described many new species and subspecies. In California birds his name occurs in Oberholseria, a generic designation of the Green-tailed Towhee, proposed by Richmond in 1915, and in the name of a subspecies of Vireo (Vireo h. oberholseri) described by Bishop but not now regarded as separate from Vireo huttoni.”