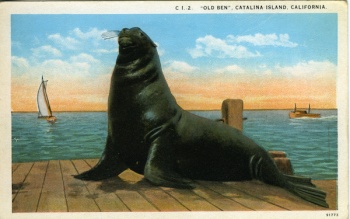 OLD BEN, Sea Lion of Santa Catalina Island (-1926) was a friendly and now legendary bull California sea lion who was a regular feature along the beach at Avalon, Santa Catalina Island after the turn of the century. He was originally tamed by boatmen who brought him fresh albacore almost every day. Ben was known to bellow from the middle of the street until someone gave him a fish. Old Ben was featured in the Mack Sennett film, The Sea Nymphs, in 1914, starring Mabel Normand and Roscoe “Fatty” Arbuckle. Ben, whose weight was estimated at about 1,750 pounds, is said to have drowned after becoming entangled in a fisherman’s net in 1926. On September 18, 1975, a statue of Old Ben, created by Stanley Rosin and given to the city of Avalon, was unveiled at Cabrillo Mole.