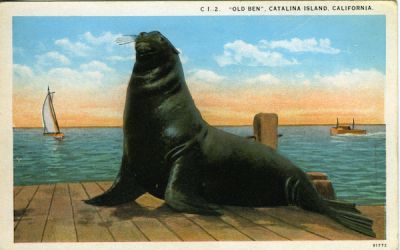 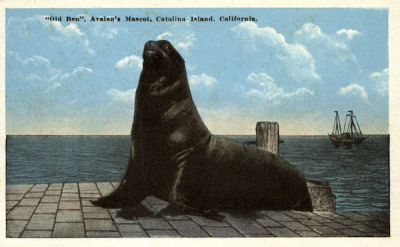 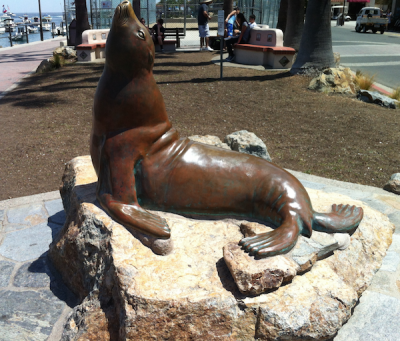 Old Ben, Catalina Island, California
This is one of several C.M. Robbins souvenir spoon designs which displays an identified image of Old Ben. This particular design appears to be their only one exclusively produced in homage to Old Ben. Here “Old Ben” is outlined in the pierced handle of a sleek modern Art Deco style spoon. The only other image on the spoon, just beneath Old Ben, is a fish, likely a tuna. The caption “Catalina Isle” runs down the stem. The reverse is undecorated, save for the Robbins’ maker’s marks and “Sterling”
[original in SCIF archives]

OLD BEN, Sea Lion of Santa Catalina Island (-1926) was a friendly and now legendary celebrity bull California sea lion who was a regular feature along the beach at Avalon, Santa Catalina Island after the turn of the century. He appeared in Avalon Harbor in 1898, was originally tamed by boatmen who brought him fresh albacore almost every day. Initially habituated to humans by fishermen who fed him an occasional fish, he became a regular summer season beggar on the Avalon waterfront. Ben was known to bellow from the middle of the street until someone gave him a fish. Old Ben was featured in the Mack Sennett film, “The Sea Nymphs” in 1914, starring Mabel Normand and Roscoe “Fatty” Arbuckle. His popularity and notoriety earned him appearances on several different souvenir spoons manufactured by the Shepard Mfg. Co., the Watson Co. and C.M. Robbins. Ben, whose weight was estimated at about 1,750 pounds, is said to have drowned after becoming entangled in a fisherman’s net in 1926.