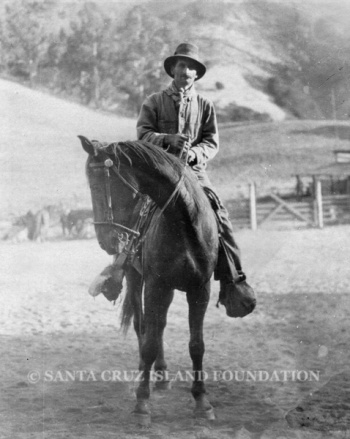 OLIVARI, Pietro (1886-1961), Italian-born Santa Cruz Island employee who, from 1901 until his death in 1961, devoted his entire life to Santa Cruz Island. He was hired as a sailor on November 21, 1901 at $20/month. He never married. He knew no other life. Pete is responsible for much of the island history as we know it today. He kept meticulous weather records on a daily basis, year after year. October 5, 1918 the Santa Cruz Island Company wrote to the local draft board for World War 1 to ask that Pete be reclassified:

“Olivari has been employed on the island for a number of years, several of these as foreman of one of the outside ranches. More lately we have used him in the capacity of working foreman, being able to send him to any part of the island or to Santa Barbara, when necessary, to assist in the unloading of island products.”

Olivari was reclassified into Division C, Class 2 “which is probably the best we will be able to do” recorded the superintendent.

An archaeological museum was installed by the Santa Cruz Island Foundation in 1990 in “Pete’s House” at the Main Ranch.

Translated: Pro 'Damaged. Our good friend and subscriber Mr. U. Revel, residing in Santa Cruz Island in Santa Barbara County, assumed the polite and patriotic task of collecting subscriptions among the connections of that colony of ours for the unfortunate of the great Italian disaster, not only do I begin to sign personally for the sum of 19 dollars, but he managed to collect $ 80 which he put back together with the list that we publish below:...

February 25, 1915 [SBMP]: “Scorpion Harbor scene of drowning. Belisario Valencia is swept from boat in heavy sea. Yesterday afternoon Coroner Ruiz received word from Santa Cruz Island to the effect that Belisario Valencia, one of the Caire employees, had been drowned on the afternoon of the preceding day, at Scorpion Harbor on the south side of the island. The message came from Captain Andreas [Giovanni Battista] Olivari of the power schooner Santa Cruz, who had sent a man over in a launch for the purpose of bringing the information to the coroner. It seems that Valencia was assisting in landing a lot of piles that had been taken from Prisoners’ Harbor to Scorpion. The piles were taken from the schooner onto a small boat to a lighter to the landing. There was a high sea running, and while Valencia and a son of Captain Olivari [Pete] were on the lighter, a huge wave swamped the craft and washed the men overboard. Young Olivari managed to swim ashore, but his unfortunate companion was seen no more. Coroner Ruiz sent word back to the island for the men there to keep a watch for the body of the drowned man and send the body to this city when it should be recovered, for inquest and burial. The deceased was about 40 years of age and a widower. Several relatives live in Santa Barbara.”

October 21, 1916 [SCICo]: “Young Olivari heard in Santa Barbara that the butchers were experiencing considerable difficulty in getting beef to kill and that both Gehl and Troup were out scouring the county for cattle. Their anxiety evidently doesn't extend to the island.”

November 7, 1916 [SCICo]: “Cagnazzi reports that a ewe was slaughtered at Smugglers and taken away. We are losing sheep all the time but have been unable to identify anyone. If we can't get assistance from the County we will have to take the law into our own hands. The Schooner crew could undoubtedly identify some of the members, but as young Olivari put it, "we don't like to say anything."

March 14, 1956 [LAT]: “...Once a year at Christmas, the doors of the red brick church are opened by Pete Olivari, 70. A life-long bachelor and general foreman on Santa Cruz since he came to this country from Genoa, Italy, in 1902, when he was 16, Pete is official caretaker of the church. Each year on his annual visit he checks to see that everything is in order as whenlast used for services many, many years ago. Pete pauses during his annual inspection to kneel in silent prayer. He then closes the heavy pine doors until his next visit. "I leave here once maybe every three years to go look around in Santa Barbara or Los Angeles for a couple of days. I am always glad to return to the ranch," Pete replied when asked if he is happy on the island..."”