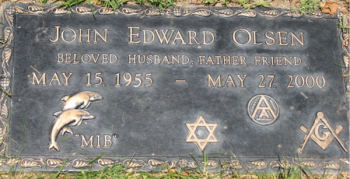 June 1, 2000 [LAT]: “Search and rescue teams continued to patrol the ocean around a popular dive park Wednesday, searching for a scuba diver who disappeared over the weekend. John Edward Olsen, 44, went diving with a friend Saturday afternoon and has not been seen since. The two friends agreed to meet at the steps at the Casino Dive Park, a popular undersea destination with sunken ships and other signs of buried treasure. But when the friend surfaced at 1:15 p.m., Olsen did not show up.”