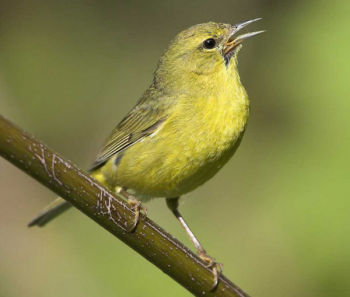 1897 San Clemente Island: “Helminthophila celata sordida—Dusky Warbler. At the time of my first, the Dusky Warblers were quite numerous in the weed-patches and brush along the ravines nearly to the beaches. But later when most of the plants were dry and dead, they were confined to the cherry thickets along the canons. Their song and habits were similar to those of the Lutescent Warbler of the mainland. Seventeen specimens of the Dusky Warbler were taken...The party consisted of Joseph Grinnell, who had immediate charge of the expedition, and gave special attention to the ornithology and entomology of the islands; Horace Gaylord, who collected mammals; and Harry Gaylord and James Brittan [Britton] who devoted their time to archaeology. The party left San Pedro harbor May 11 in a large fishing schooner... [returning June 9, 1897]”
Grinnell, Joseph The Islands of Santa Barbara, San Nicolas and San Clemente, in the Spring of 1897 Pasadena Academy of Sciences Publication No. 1, August, 1897 (26 pages).

1907 San Clemente Island: “Helminthophila sordida. Dusky Warbler. Common from January until late September, in all the large canyons. Rare on the Island in October, but common on the mainland coast.” [“Visits were made to Clemente in January, February, March, April and October, 1907.”]
Linton, C. B. Notes from San Clemente Island The Condor 10:82-86, March 1908

1905-1906 Santa Catalina Island: “Helminthophila celata sordida. Dusky Warbler. Dusky Warblers were very common in the canyons and in the scrub oaks on the hillsides, where they were nesting. The hight of the breeding season must be the last of March, for many fully fledged juveniles and nestlings were seen by the middle of April. They were nesting in small scattered colonies, the nests usually being placed in scrub oaks from fifteen to twenty feet from the ground. Some nests however were built in sumacs, and one was found in vines overhanging a gorge. They were quite bulky affairs, made of leaves, small twigs, grass and bark, lined with fine grass or sheeps’ wool. Dimensions of two nests are as follows:

Several clutches of four eggs were noted, besides quite a number of incomplete sets. The ground color of the eggs is ivory white, dotted and finely blotched with burnt sienna and pale lilac. The female is a very close sitter, almost allowing herself to be removed by the hand, and when driven from the nest feigns a broken wing, falling lightly to the ground, only to return and repeat the process, or utter scolding notes resembling “chit-chit.” The male bird was always present with the female when the nest was being examined, but did not express so much anxiety as his mate. When the female was sitting he would hop about in the nearby trees, uttering at intervals his beautiful warbling song, “ti-ti-ti-ti-ti-ti-ti-ti-ch-ch-ch,” beginning quite slowly and gradually gaining in rapidity. This, I must say, is a poor rendition of the song, as there is a certain metalic ring to it, which cannot be expressed in words.” [“These notes are the result of two brief sojourns on Santa Catalina Island in the month of April, eight days being spent in 1905, and five in 1906. Fortunately both trips were made after wet seasons; the hills were carpeted with grass, flowers and insects were abundant.”]
Richardson, Charles H., Jr. Spring Notes from Santa Catalina Island The Condor 10(2):65-68, March 1908

1907 Santa Cruz Island: “Helminthophila sordida. Dusky Warbler. Very common.” [“At 11:30 p. m., November 19, 1907, my father (H. Linton), Mr. George Willett, and myself left San Pedro harbor in a dilapidated fishing smack and in company with a crawfisherman, one “Cold-foot” Jorgensen. We arrived off the south end of Santa Cruz Island at 10:30 the following day during a stiff norwester. For various reasons we were unable to make camp until the 22nd. It may not be amiss to state here that twice during the blow we were nearly wrecked: once while at anchor in Potatoe Harbor, a broken anchor allowing the boat to drift within the breaker line and nearly onto the rocks. In this instance the timely arrival of Willett and H. Linton in a small boat, saved the day, and incidentally the fishing smack. At another time (the engine having broken down) we were blown nearly onto the rocks of Anacapa Island; but with father at the wheel and Willett and I on the “sheet” we managed to hold her off. I mention the foregoing, and the many sleepless nights spent on the rocky shores, “running” the surf several times each day (with attendant duckings), etc., merely as a warning to those who seem inclined to believe a field naturalist’s life “strewn with roses”. (Its ’ generally strewn with cacti!)”]
Linton, C. B. Notes from Santa Cruz Island] The Condor 10(3):124-129, May 1908