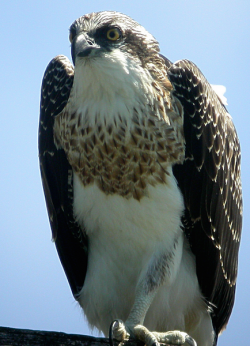 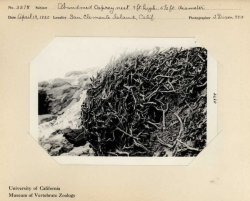 Osprey (Pandion haliaetus), also called fish hawks, are found near water in most parts of the world. The American osprey feed solely on live fish, and are usually seen hovering over water or roosting close to shore. Osprey plunge into the water feet first to grasp its prey. Although they were commonly seen around the Channel Islands historically, sightings have become much less frequent. Ospreys are classified in the phylum Chordata, subphylum Vertebrata, class Aves, order Falconiformes, family Pandionidae.

1897 San Clemente Island: “Pandion haliaetus carolinensis—American Osprey. The Ospreys were quite abundant about the south end of the island, and there was hardly a rocky promontory or pinnacle which was not used as a nesting site. The nests were all either on pillars of rocks standing directly in the surf, or on over-hanging ledges close above the water. As usual they were bulky affairs of course sticks, lined with sea-weed and grasses. One nest I climbed to appeared at first sight to contain nothing, but on picking over a hummock of grass in the center, I discovered the set of eggs. The grass formed a felted mat or lid which was attached to the nest on one side, and when closed over the nest, perfectly concealed the eggs and protected them from cold. When lifted, the lid laid up on the side of the nest, leaving the eggs exposed. This is of course quite unusual, all the other nests examined were without any such adjunct. Five sets of fresh eggs were taken from March 29 to April 3. Eleven eggs average 2.48 x 1.86. Three eggs constituted a full set. On June 7, nests contained young from a few days old to nearly full-fledged. Four specimens of the American Osprey were taken—two adult males and two young...The party consisted of Joseph Grinnell, who had immediate charge of the expedition, and gave special attention to the ornithology and entomology of the islands; Horace Gaylord, who collected mammals; and Harry Gaylord and James Brittan [Britton] who devoted their time to archaeology. The party left San Pedro harbor May 11 in a large fishing schooner... [returning June 9, 1897]”
Grinnell, Joseph Report on the Birds recorded during a visit to the Islands of Santa Barbara, San Nicolas and San Clemente, in the Spring of 1897 Pasadena Academy of Sciences Publication No. 1, August, 1897 (26 pages).

1907 San Clemente Island: “Pandion haliaetus carolinensis. American Osprey. During January and February a number were seen. In March they were observed remodeling old nests along the northeast coast and two fresh sets were found: March 9, one of three; March 31, one of three. On April 2, I visited a colony of twelve or fourteen nests on the southeast coast. Here, incubation ranged from fresh to two-thirds advanced. One set of four eggs was secured, and another found; one egg of the latter set had been crowded out of the nest onto the rocks and broken. Nests varied in size from a few sticks and pieces of sea-weed to immense piles of sticks and kelp four to six feet in hight by three to five feet in diameter, cavity of the largest being (diameter) twelve inches by (depth) four inches. The majority of nests were built on columns of rock standing directly in the surf. ” [“Visits were made to Clemente in January, February, March, April and October, 1907.”]
Linton, C. B. Notes from San Clemente Island The Condor 10:82-86, March 1908

1984 San Cemente Island: “OSPREY (Pandion haliaetus). Formerly a common breeder (Grinnell 1897a; Breninger 1904: Linton 1908; Howell 1917; Willett 1912, 1933), now a rare visitor. Two modem records: one 13-20 Oct 1975 (Robert Cohen); one 13 Jun 1978 remained 3weeks (Jan Larson). SCI had the largest breeding populalion off the coast of California with 20 active nests found in 1907 (Linton 1908). Kiff (1980) reported that the last nest record was for 26 Mar 1927 and that the species was declining and may have ceased to breed by 1930. Persecution by humans, particularly shooting by fishermen, appears to have led to their decline, although Kiff (1980) speculated that "some deleterious change in food supply" could also have contributed to the Osprey's extirpation as a nester on the Channel Islands.”
The Birds of San Clemente Island, 1984

1897 San Nicolas Island: “Pandion haliaetus carolinensis—American Osprey. Tolerably common...The party consisted of Joseph Grinnell, who had immediate charge of the expedition, and gave special attention to the ornithology and entomology of the islands; Horace Gaylord, who collected mammals; and Harry Gaylord and James Brittan [Britton] who devoted their time to archaeology. The party left San Pedro harbor May 11 in a large fishing schooner... [returning June 9, 1897]”
Grinnell, Joseph The Islands of Santa Barbara, San Nicolas and San Clemente, in the Spring of 1897 Pasadena Academy of Sciences Publication No. 1, August, 1897 (26 pages).

1907 Santa Cruz Island: “Pandion carolinensis. American Osprey. I saw one osprey near the southern coast November 25.” [“At 11:30 p. m., November 19, 1907, my father (H. Linton), Mr. George Willett, and myself left San Pedro harbor in a dilapidated fishing smack and in company with a crawfisherman, one “Cold-foot” Jorgensen. We arrived off the south end of Santa Cruz Island at 10:30 the following day during a stiff norwester. For various reasons we were unable to make camp until the 22nd. It may not be amiss to state here that twice during the blow we were nearly wrecked: once while at anchor in Potatoe Harbor, a broken anchor allowing the boat to drift within the breaker line and nearly onto the rocks. In this instance the timely arrival of Willett and H. Linton in a small boat, saved the day, and incidentally the fishing smack. At another time (the engine having broken down) we were blown nearly onto the rocks of Anacapa Island; but with father at the wheel and Willett and I on the “sheet” we managed to hold her off. I mention the foregoing, and the many sleepless nights spent on the rocky shores, “running” the surf several times each day (with attendant duckings), etc., merely as a warning to those who seem inclined to believe a field naturalist’s life “strewn with roses”. (Its ’ generally strewn with cacti!)”]
Linton, C. B. Notes from Santa Cruz Island] The Condor 10(3):124-129, May 1908

“Late in the evening of July 11 [1922] an osprey was shot at the landing place; this species had not previously been reported from Guadalupe Island.” * G Dallas Hanna