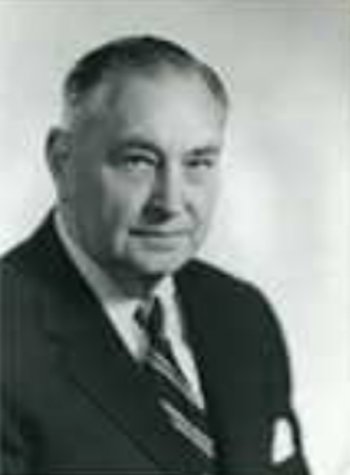 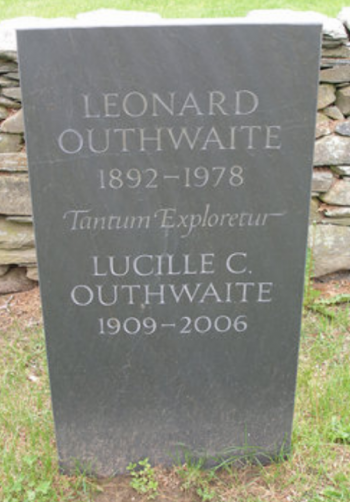 OUTHWAITE, Leonard B. (1892-1978) was an anthropologist, author, explorer, staff member of the Laura Spelman Rockefeller Memorial (1923-1928), and consultant in various fields from population growth to museum programs. According to Ronald Olson (1930), Outhwaite mapped 86 sites on Santa Cruz Island in 1918. Outhwaite owned the 90-foot steel-hulled schooner, Kinkajou, (formerly Saracen) designed by noted naval architect, John G. Alden. In 1929, Explorers’ Club member, Outhwaite, sailed Kinkajou from New York to Portsmouth, England, down to Spain and Morocco, and in 1931 authored Atlantic Circle — Around Ocean with Winds and Tides. Kinkajou was later owned by oilman/ornithologist J. R. Pemberton until 1935 when she sold again.

In 1936, Outhwaite married ballet dancer, Lucille Conrad (1909-2006), who had her own ballet school on Long Island, New York from 1949-1957. They moved to Switzerland for five years, returning to live in Newport, Rhode Island. Outhwaite’s papers, 1929-1977, are located at the Rockefeller Archive Center, New York.

April 25, 1916 [SBDNI]: “Bent on a search for ‘prehistoric refuse piles,’ which tell their tale of the Indian villages of the past, their population and of the life of their inhabitants, Leonard Outhwaite of the University of California and Mrs. Outhwaite left this morning for a week’s stay on Santa Cruz Island. The mounds which are on the island as well as those scattered all along the Pacific coast from San Diego to Humboldt Bay were formed by the Indians throwing the shells of the shellfish they ate, the stones from the fireplace and remains of abandoned houses in one grand heap. These mounds, Mr. Outhwaite declared, told a tale of Indian life of great interest and value to the anthropologist and the University of California is sending out expeditions to map the location of the mounds and gather data for a work on the Indian villages. ‘This mound-building process is still going on,’ said Mr. Outhwaite at the Potter Hotel before setting out this morning. ‘Everywhere you get Indians living on the coast apart from other people, they continue to build these mounds, and a true story of the life of the people do they tell. Santa Cruz offers one of the best sites for exploration and investigation along these lines. There were a great number of Indian villages there, as we noticed a few weeks ago, when with Professor Waterman of the university we went to the island to select camp sites.’ On their present trip, Mr. and Mrs. Outhwaite will be gone a little over a week, but they plan several visits to the island to gather data for their work.”

May 8, 1916 [SBDNI]: “The Indian population on Santa Cruz Island varies from time to time, but 1000 is an approximate of the mean number, Leonard Outhwaite, anthropologist of the University of California, declared today on his return from an inspection trip of the island. Mr. Outhwaite bases his estimate on the mounds of the island, which he is mapping for the university. There are about 100 mounds on the island, Mr. Outhwaite said. Of these, the largest is at Prisoners’ Harbor. The mound is near fresh water and the course of the stream which has changed recently, now divides it. It is 150 feet wide, 300 feet long and has a maximum depth of about 18 feet. This makes the best mound for visitors to the island to inspect. The university hopes to excavate this and other mounds when money for that purpose is at its disposal. In that way, much can be learned of the implements used by the Indians at various times. The present mound map of the island gives an idea of the population, the influence sources of water and food supply had on their location, etc. Most of the mounds are on cliffs near fresh water streams and close to the shore where the best shell fish could be caught.”

May 1, 1928 [SBDN]: “Over one hundred mounds built by the early mound builders have been discovered on Santa Cruz Island by Leonard Outhwaite of the University of California in his first week’s search. Mrs. Outhwaite said today on her return from Santa Cruz [Island], where she has been with her husband. ‘The work has been most successful,’ Mrs. Outhwaite declared. ‘In fact, it had been planned to do San Miguel, Anacapa and Santa Cruz islands in the time it is taking to do Santa Cruz, so the exploration of all but Santa Cruz has been postponed until fall.’ Mr. Outhwaite, who is interested in anthropological work, finds that he can determine many interesting facts regarding early life on the island by an inspection of the mounds. When one is found larger than the rest, he surveys it, getting the width, depth and general position with relation to fresh water. The mounds are always situated near early Indian villages and from their size and general appearance estimates can be made of the early population. Mr. Outhwaite is expected to return from the island Wednesday or Thursday. His work is done in conjunction with other expeditions sent out by the university to map the mound sites in California. Mounds are being found the entire length of the coast from Humboldt Bay to San Diego.”