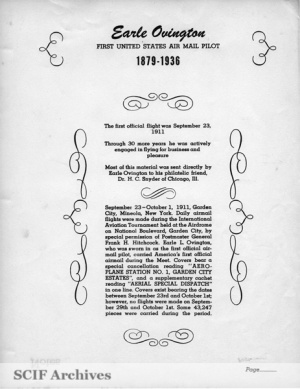 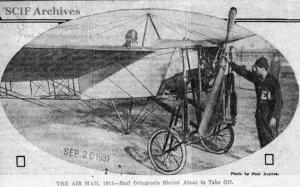 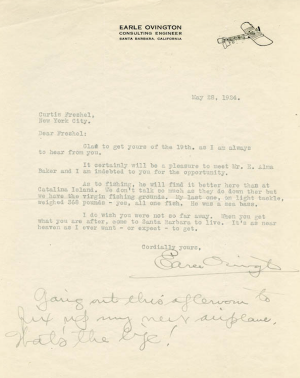 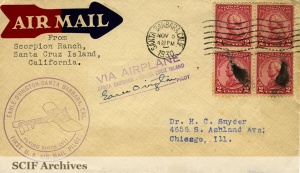 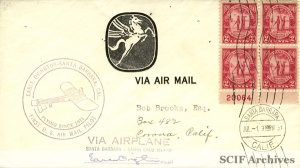 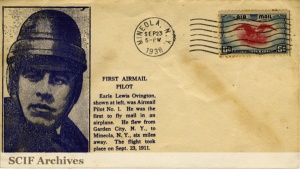 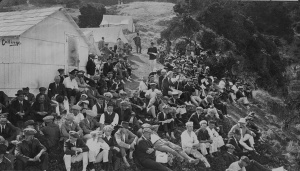 OVINGTON, Earle Lewis (1879-1936), Chicago-born pioneer pilot who was graduated from the Massachusetts Institute of Technology in 1904 with a degree in electrical engineering. He worked as a lab assistant to Thomas Edison. In 1911 Ovington attended aeronautical school in France under Louis Blériot, the first person to fly across the English Channel (1909).

Ovington and his family moved to Santa Barbara in 1920 and became the town’s first aviator. He was commodore of the Santa Barbara Yacht Club in 1922. He also became the first official air mail pilot in the United States. Ovington taught George Hammond how to fly.

“...I had to go to town for groceries one day, and Ira stayed in camp. When I started back there was a gale blowing. With sails all set, the Sea Wolf was straining from the wind, and it was a wonderful feeling as she rose to the top of the long swells. Every little while her rail would go under water, and she bucked and pitched like a thing possessed. She didn't seem to make much headway against the mountains of green water. Far above in the sunshine flew an airplane piloted by Earle Ovington, on its way to make the first landing at Scorpion Harbor...”

“In 1927 the late Earle Ovington of Santa Barbara and one of the pioneers in American aviation flew to our ranch. He landed in the small field by the ranch house at Scorpion. It took several days before an easterly wind permitted him to take off. In the meantime, he located two sites which were much more satisfactory. These fields serve us today for this purpose.”

Ovington died of cancer in 1936 at the age of 57. He was cremated and his ashes were scattered at sea. The Santa Barbara Municipal Airport in Goleta is named Earle Ovington Terminal in his honor.


Dear Mr. Gherini,
By the time you get this one of three things will have transpired:
I will have made the first airplane flight to Santa Cruz Island;
I will have landed in the water and served as shark bait;
or I will have been prevented from meeting one of the foregoing two fates by some unforeseen occurance.

Tomorrow, in other words, I expect to make the hop to Scorpion Ranch. All is ready, even to arranging with the post office to cancel the Lindbergh air mail stamps which I placed on the letters I will carry. I look forward to the little adventure with keen anticipation!

P.S. This letter goes to Scorpion Ranch, as air mail to be brought back on the return trip and mailed to you in San Francisco.

November 29, 1921 [SBMP]: “Yachtsmen photograph proposed harbor site. With a view to preparing a series of views to show the protected anchorage into which it is proposed to convert the well-known bird refuge, two enthusiastic yachtsmen, Earle Ovington and Tom Cornwall, accompanied by J. W. Collinge, photographer, yesterday took a number of photographs of the coast between the wharf and almost up to Miramar. The photos were taken from the deck of the John Percival Jefferson's yacht, Invader, offered by its owner for the purpose, Capt. Sam Burtis sailing the stately craft back and forth until the yachtsmen had taken all the pictures they wished. The photographing was done by Mr. Ovington, who climbed to the masthead of the yacht, carrying a camera on his back. Eighteen plates were exposed in all, those showing the bird refuge and its proposed entrance being taken while the Invader sailed so close to shore that her keel almost touched bottom. The views of the bird refuge and the beach outside will be retouched by John Chard, architect, so as to give a visual representation of what the proposed harbor will look like when completed. Two jetties and an entrance to the harbor from the ocean will be painted in by the architect on one of the photos, which will then be enlarged so that a complete visualization of the entire project may be had. After the photographing was completed the yachtsmen expressed their thanks to Mr. Jefferson on behalf of the yacht club for his courtesy in permitting the use of the Invader. The yacht owner stated that he was deeply interested in the proposed harbor project and said he hoped the scheme to dredge the bird refuge and make a yacht harbor out of it would come to pass in the not distant future. Mr. Ovington said the club contemplated the taking of another series of photographs from an airplane within the next few days, in order to get an adequate bird's-eye view of the proposed anchorage. It appears that practically the entire membership of the club favors the dredging of the bird refuge rather than the Chapman plan.”

April 24, 1928 [LAT]: “Flyer held on island. Earle Ovington, Santa Barbara airman, returned to the mainland yesterday after spending three days marooned on Santa Cruz Island. Last Wednesday Ovington, dean of airmail flyers, carried the first mail ever delivered by airplane across the Santa Barbara Channel to the home of Ambrose Gherini on the eastern end of the island. On the way over he flew above the radio station at Fry’s Harbor and a message from there later told of his safe arrival. He also dropped a message on Santa Rosa Island. Soon after he landed in a canyon near Scorpion Harbor with a runway of 696 feet and ninety feet wide. Then the wind began to blow, as it often does on the island, and did not die down until yesterday morning. Then Ovington flew out of the canyon to Campo Grande field, where he took Z. Zulberti, superintendent of the island, as a passenger and returned to the mainland in fourteen minutes.”

September 4, 1928 [ODC]: “Frederick Law Olmstead of Boston, leading authority in the United States on parks, will make an inspection of Santa Cruz Island from an airplane next Friday, in company with George A. Batchelder and Earle Ovington of Santa Barbara… As Mr. Ovington has flown over the island many times and is familiar with all of its beauties, Mr. Batchelder selected him as a companion for the trip. They will secure a four-passenger hydroplane from the Western Air Express—one of the ‘flying boats’ plying between Wilmington and Avalon—and, starting at 10 o’clock next Friday morning from Wilmington, will fly with their distinguished guest and his guest, Charles A. Cheney, who made the city plan for Santa Barbara, first to Catalina and over the island itself, then to Santa Cruz Island where, flying at a height of 500 feet, every point will be inspected…”

September 10, 1928 [ODC]: “A hydroplane inspection of Santa Cruz Island was made Friday by Frederick Law Olmstead, famous landscape authority selected by the State of California to pass upon the desirability of the various park sites proposed by the different localities as desirable to be included in the purchases to be made from the proposed bond issue of $6,000,000 to be voted on at the coming election. The trip was a success, and Mr. Olmstead expressed himself afterward as having his previous favorable impression strengthened by the thoroughness of the very novel method of inspecting the property from the air… The party… turned south, skirting the north side of Santa Cruz, passing the breakwater quarry, which has not disfigured the landscape, and tobogganed into Pelican Bay, where they found but one yacht and the tug from the quarry with 75 gallons of Richfield aviation gasoline, which was poured into the hydroplane’s nearly empty tanks. After eating lunch, the tug towed the hydroplane out of the bay at 2:45, and the party took off into the air after a few a few hard bumps on the choppy sea that made the plane boom like a huge bass drum…”