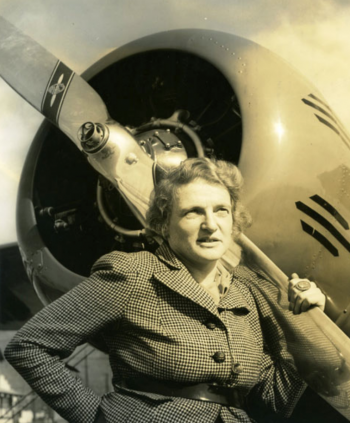 OWEN, Bessie (1896-1967), one of America's first woman aviators who won fame on a flight from Paris to Shanghai. Born into a wealthy San Francisco family, she learned to fly in San Francisco in 1924, and she became a close friend of Amelia Earhart. Owen eventually earned her commercial pilot's license.

Al Vail remembered in the early 1930s a plane landing on Santa Rosa Island as he and his brother, Russ, watched. Three women got out: Bessie Owen, Effie Fairchild, and Al's spinstress aunt, Louise Mills. The two older women held onto their hats and their skirts in the wind. In the early 1940s, Owens piloted Phil Orr over Santa Rosa Island on a preliminary aerial survey for the purpose of determining the extent of the fossil elephant beds. Although plans for an expedition were interrupted by the war, with the aid of the Coast Guard, Orr's aerial reconnaissance was continued. [Leaflet November 1947]. Owen’s pre-World War II activity included flights over Europe, Africa, the Middle East, India, and China.

1941. “...While several short exploratory trips were taken to Santa Cruz and Las Anacapas Islands, it was not until December 7, 1941, when, at the invitation of Mr. Ed Vail, of Vail & Vickers, owners of Santa Rosa Island, plans were made for a survey and excavations of the mammoth beds. For this trip, Miss Bessie Owen volunteered the use of her plane and her services as pilot. Miss Owen and I made a complete aerial coverage of the Island, spotting promising fossil deposits, wave-cut terraces, caves, and Indian village sites and returned to the airport on the mainland, only to find that the Japanese had raided Pearl Harbor!. This abruptly ended our hopes for immediate work on Santa Rosa Island, which had been so long in the planning, but the delay did have its compensations...” [Orr, Phil C. Prehistory of Santa Rosa Island, 1968, p. 9.]