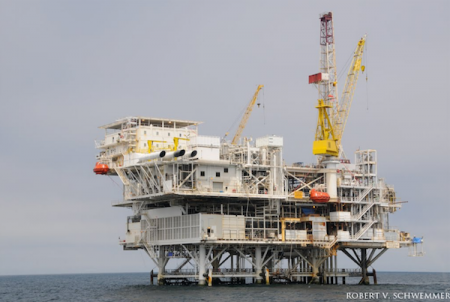 There are 27 oil rig platforms along the coast of California. The first letter of a platform name has to do with its north/south location. Platform Irene is the furthest north. Emmy is the furthest south. Three were named with a letter: A, B & C. The 1969 Santa Barbara oil spill occurred from Platform A.

Venoco, with offices based in Carpinteria, California, operates platforms Gail, Grace, and Holly.

Exxon Mobil Corporation's Platform Harmony, in 1200 feet of water, is the largest and deepest platform offshore southern California. From sea floor to top, it is taller than the Eiffel Tower and the Empire State Building.

Rincon Island in Ventura County, approximately 1000 feet offshore, is an artificial island in the Santa Barbara Channel built in 1958. It is the site of oil production in 55 feet of water near the seaside communities of Mussel Shoals and La Conchita. Oil is pumped via pipeline to shore. Rincon Island is connected to the mainland by the Richfield Pier, currently considered unsafe for vehicular traffic other than golf carts.

Long-term bans were placed on new oil field leasing in State waters in 1969, and in Federal waters in 1984. Drilling and production continues on existing leases.

It is expected that oil and gas platforms eventually will be decommissioned as they reach the end of their useful oil and gas production lifetimes. Laws and regulations have changed in anticipation of decommissioning to allow feasible alternatives such as the creation of artificial reefs, in a movement known as Rigs to Reefs.

Oil exploration on and around the California Channel Islands began as early as the turn of the century. However, the would-be prospectors soon found out the islands were already reserved by the U.S.government for lighthouse purposes.

May 23, 1879 [SBDP]: “The oil that covers the ocean for miles off More’s Landing is said to be more extensive this year than ever before.”

November 17, 1899 [LAT/SB]: “On account of the scarcity of oil cars, the Summerland oil producers have been compelled to tank their oil for several weeks, and yesterday two companies were forced to pump oil into the ocean for lack of tanks. Several others will be compelled to do the same soon, if cars are not secured. They are compelled to keep up pumping or the wells become filled, and have to be reopened.”

February 4, 1900 [SBMP]: “Oil on the islands…It is claimed that the [Summerland] oil bed extends under the Channel Islands, and prediction has been made that these islands will some day be successfully exploited by oil prospectors.”

June 29, 1900 [SBMP]: “Oil on the islands. Anacapa, San Nicolas, and Santa Barbara staked off. Ventura prospectors get in on the ground floor across the channel… Messrs. Barry, Barnard, Hall Eastin and Sheridan sailed for the island, resolved to locate land for oil. They did so, and brought back specimens of oil rock, oil sand, asphaltum, and gilsonite of a high quality...”

July 7, 1900 [OC]: “Wonders of Anacapa Island. Captain Merry sailed last Friday in his yacht Naiad for Anacapa Island… Some Ventura oil boomers lately visited the island, surveyed and located a number of oil claims; but as the island is a Government reservation for lighthouse purposes, the trespassers will be promptly ejected.”

October 1, 1903 [SBMP]: “The large tug Whittier with the oil barge Santa Paula and the bark Fullerton in tow passed up the channel yesterday afternoon at 3:30 P.M. The boats arrived from the Hawaiian islands some days ago, and are on their return voyage with a cargo of oil.”