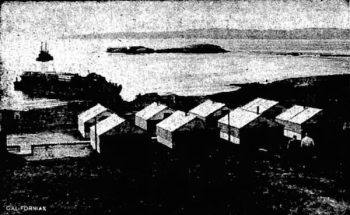 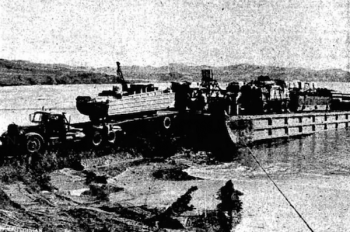 Santa Cruz Beachead—The big rotary rig which Coastal Drilling Co. sent to Santa Cruz Island to drill Richfield Oil Corp's wildcat was loaded in Long Beach and unloaded on one of the few accessible beaches of the island, which is 22 miles off the coast at Santa Barbara.
Forney's Cove, Santa Cruz Island, 1955

In Los Angeles in an April 2, 1992 interview with Edward M. “Mo” Benson (1920-2009), Vice Chairman emeritus of Atlantic Richfield Company, he recalled the first well being drilled on Santa Cruz Island in 1958. Carey Stanton invited Robert O. Anderson, chairman of ARCO, which had merged with Atlantic Richfield in January 1966, to visit the island during the time he was in negotiations with The Nature Conservancy.

February 4, 1926: [ ]: “A party of 25 officials of the Union Oil Company in Los Angeles will visit Santa Cruz Island over the weekend. While the trip is announced as a pleasure cruise, recent reports in reality and business circles that oil developers are interested in the island, led to the prediction yesterday that minute inspection of the island will be made with a view of prospecting for oil.”

April 7, 1930 [LAT]: “Santa Cruz Island, embracing about 53,000 acres, which was leased three months ago, soon may be the scene of considerable activity, for the agreement to start operations there may be put into effect by the Standard Oil Company within a short time… In keeping with its intentions to determine if the islands contain oil in commercial quantities, Standard is reliably reported to be leasing Santa Rosa Island, which embraces approximately 35,000 acres. Although somewhat smaller than Santa Cruz Island, the former is considered one of the most likely prospects for discovery of oil…”

October 21, 1954 [SBNP]: “Richfield Oil Corp. has leased 54,400 acres of land on Santa Cruz Island off the Santa Barbara coast and will drill its first exploratory hole there before the end of 1954, the firm announced today. Company spokesmen said Richfield has made an extensive geological survey of the island and will continue that work there in choosing a site for the initial drilling effort. Preparations are being made to move a rig to the island capable of going 10,000 feet, it was announced. As early as could be learned here, no oil wells have been drilled on Santa Cruz Island, although seven or eight attempts have been made on the adjacent Santa Rosa Island. None of the latter resulted in commercial production, but some oil showings were found. The lease covers all of the island except about 6800 acres on the eastern end, owned by the Gherini family. Edwin L. Stanton of Long Beach has owned the balance of the island for quite a number of years.”

October 23, 1954 [LBI]: “Drilling operations will be started by Richfield Oil Corp. on a 54,000-acre site on Santa Cruz Island before the end of the year, the company announced Friday. Richfield said its lease covers all the island except the 6800 acres at the east end. Preparations are under way to move to the island a rig able to drill to a depth of 10,000 feet. No oil well ever has been drilled on Santa Cruz, Richfield officials reported. During the past 30 years, seven or eight wells have been drilled on neighboring Santa Rosa Island, but none was successful.”

January 17, 1955 [Bakersfield Californian]: “Local oil men who last year brought in Nevada's first discovery well for Shell Oil Co. are currently engaged in another interesting operation—the drilling of a wildcat on Santa Cruz Island, 22 miles off the coast at Santa Barbara. The local men, employees of Coastal Drilling Co., are drilling the wildcat under contract to Richfield Oil Corp., holder of a lease covering about 54,000 acres on the channel island. Before the recent advent of the oil men, lonely, rugged Santa Cruz Island, easternmost island in a chain of three islands off the coast of Santa Barbara, was in habited mainly by cattle and sheep. Situated on the western tip of Santa Cruz Island, Richfield's wildcat is the first to be drilled on the island. On paper, the wildcat is programmed to go to 7,500-8,000 feet, but the rig is capable of going to 10,000 feet if necessary. Life on the island is mostly work for the Bakersfield drilling crews: crews' time is scheduled so they are on the island 12 days, working each day, and off four. Recreation on the island is limited to watching television, with a range of something like eight stations available for the men, and fishing. Richfield solved the problem of transportation for the crews by building a 2,600-foot air strip near the well site and flying men in and out from Burbank for their days off. Biggest difficulties encountered in setting up the Richfield wildcat were the weather and the condition of the sea, according to Irving Funk, division manager of Richfield's southern division. Some of the water around Santa Cruz Island is said to be as rough as any found on the coast, and one unloading operation was delayed several days due to unfavorable weather conditions. Drilling equipment was loaded in Long Beach and brought by barge to the landing beach at Santa Cruz Island. Standard operating procedure when it came to unloading equipment was to beach a barge, build a ramp to it with a cat, and then proceed with the job of unloading. Most of the actual operation was directed by Joe Dunn, division construction superintendent of Richfield's southern division. Richfield geologists will "sit on" the well in approximately three-day shifts, according to present plans. Geological and engineering personnel travel to and from the island in a Beechcraft Bonanza, which makes the flight from Burbank in less time—about 45 minutes—than it takes the men to drive from the Long Beach office to the airport. Food and supplies for men quartered on the island will largely be flown in from Santa Barbara by the twin-engine Lockheed plane which carries drilling crews to and from the island. Incidentally, visitors are not allowed on Santa Cruz Island. Neither are firearms or liquor, according to terms of the lease between Richfield and the owner of the island. Toolpushers for Coastal Drilling Co. on the island drilling job are E. E. (Bud) Fletcher and E. A. (Eddie) Thompson, both of Bakersfield. Drillers assigned to the job are C. L. Bunce, Luke Gorham, V. E. Shank and C. T. Whitney, Jr. Crew men include C. E. Collins, A. R. Earnshaw, J. G. Goad, J. R. Gordon, Everett Hines, C. H. Howell, M. J. Humecky, M. J. Humecky, Jr., L. C. Manka, K. W. Moss, G. W. Phillips, P. D. Reed, W. J. Rowland, M. N. Smith, L. E. Stephens, D. H. Weller, W. B. Weller and Bud Williams.C. T. Whitney is vice president and general manager of the local contract drilling firm.”