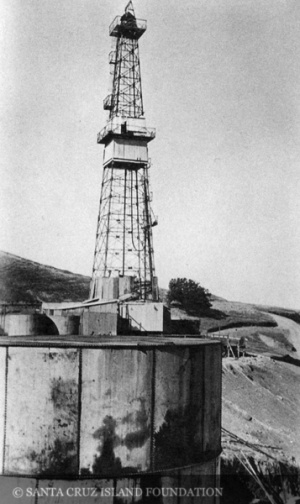 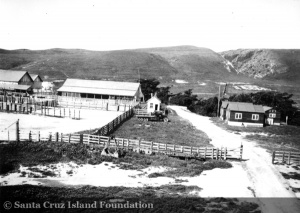 Barns-School House-Standard Oil Bunk houses. One of the first trucks on SRI is pictured in front of the school house. The truck was owned by the Standard Oil Company. c.1932 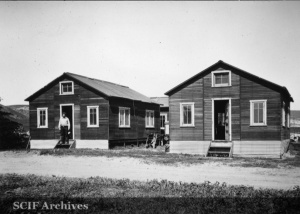 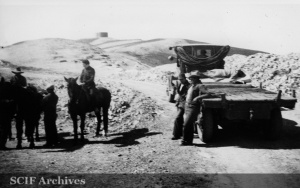 Richfield Oil Company sent geologists Frank A. Morgan (1898-1976), Harold Hoots (1899-1979), Rodman Cross (1911-1970) and Thomas Dibblee, Jr. (b. 1911) to Santa Rosa Island in 1938 to help determine if the island had oil potential. No lease resulted from their investigations, however a competitor, the Superior Oil Company, leased drilling rights after the war (1948-1949). Despite repeated drillings in a variety of locations, no significant oil was ever found.

October 20, 1931 [LAT]: “A Standard Oil Company surveying crew yesterday was enroute to Santa Rosa Island offshore from Santa Barbara and is expected to make a survey of the island, a portion of which is understood to be leased to the company for oil exploration purposes. More than a year ago Standard leased approximately 54,000 acres of Santa Cruz Island, which adjoins Santa Rosa, and while no immediate test was planned, it is definitely understood that the company plans to make a thorough deep test there soon for commercial production. Several years ago a move was under way to drill for oil on Santa Cruz and Santa Rosa islands. The Bardsdale Oil Company, including the old Marland Oil Company, now the Continental, were among th operators to become interested in the venture. An accurate geological survey has already been made of both islands and five separate and distinct structures are said to be located on Santa Cruz Island, while the chances of oil discoveries on Santa Rosa are still problematical. Geologists assert that the oil structure, if any exists on Santa Cruz Island, parallels the Ellwood oil field, and while not a continuation of that district would probably be separated from it by a fault.”

November 16, 1931 [LAT]: “Litigation in connection with the efforts of the Standard Oil Company to tie up a vast block of acreage on Santa Rosa Island in the Santa Barbara Channel is reported to have been settled and a search for commercial produciton is expected to be under way there early in 1932. A surveying crew was transferred to Santa Rosa Island four weeks ago, and it is reported that a site is to be selected for a wildcat well to be drilled on the northwest corner of the island. Field scouts say that there are a half dozen promising spots on this island where oil might be found, and they believe that Standard may succeed. Several other oil companies have long thought the Santa Barbara Channel group of islands good prospects for oil exploration because of their nearness to the productive Ellwood oil field. The Continental Oil Company and the Bardsdale Oil Company were among the first to endeavor to lease a block of land on two of the islands, but litigation prevented completion of their preliminary plans. More than a year ago Standard leased 54,000 acres on Santa Cruz Island and then endeavored to tie up a probably structure on Santa Rosa Island. The company now controls approximately 120,000 acres there.”

February 6, 1932 [LAT]: “Prepatory to drilling a test on Santa Rosa Island, across the channel from Santa Barbara, the Standard Oil Company is expecting to start construction oof a road to what may later be the site of that district’s first wildcat well. Standard geologists and engineers have been making a thorough survey of Santa Rosa Island for the last three months. A complete crew was transported to the island late in 1931 and it is understood to have gone over the area to choose a tentative location for the first well. Unofficial reports state the Standard may attempt to develop commercial production on what I now call the Lavieja structure. It is anticlinal, runs east and west and is situated on the northerly slope of the island. It is approximately 1200 feet above sea level. By Howard Kegley.”

April 12, 1932 [LAT]: “Within two months the Standard Oil Company is expected to complete eight miles of road to a site where a well is to be drilled on a probable structure located on Santa Rosa Island in the Santa Barbara channel. A crew has been busy on the road sixty days, and work was commenced when company geologists and engineers completed a survey of the island to determine where a test well should be drilled. By Porter Flint.”

June 4, 1932 [LAT]: “Derrick is being erected on Santa Rosa Island, in Santa Barbara Channel, by the Standard Oil Company, for its Santa Rosa #1, a seagoing wildcat well which is to be drilled this summer in search of oil. The expectation is that the well can be spudded in by the 12th inst., and that it will proceed slowly from that time forward, because the company desires to compile all available geologic information as the drill proceeds. Company officials are making almost daily trips across the channel to their new enterprise in the Standard aeroplane. A small steamer is being used to transport materials from the mainland to the island. By Howard Kegley.”