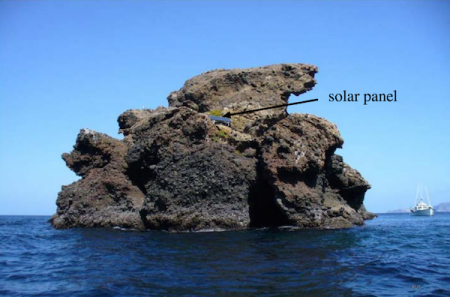 Orizaba Rock, Santa Cruz Island lies offshore from the island to the west of Orizaba Canyon. The rocks serves as a nesting grounds for Ashy Storm Petrels. To attract prospecting birds to artificial nest sites, in 2008 biologists installed an automated, solar-powered audio system to broadcast recordings of breeding Ashy Storm-Petrels. Artificial nests were installed to help attract the birds to breed on the rock and to help protect the eggs and chicks from ravens. A speaker was installed directly behind the artificial nest sites to attract the birds to this area. In addition, mirrors were attached on the outside of each nest site; for nocturnal Ashy Storm-Petrels, ambient light levels at the colony site were expected to allow the mirrors to function as “decoys” which, coupled with vocalization broadcasting, may aid this colonial seabird in selecting nest sites: