Difference between revisions of "PALMER, Edward" 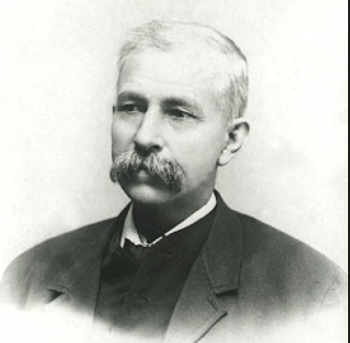 PALMER, Edward (1831-1911), the son of a professional florist and horticulturist, this self-taught British botanist, explorer and collector came to America at the age of 18. Palmer spent considerable time exploring California, Mexico, and South America. His ground-breaking botanical collections on Mexico’s Guadalupe Island are particularly noteworthy. In the field of botany Palmer is credited with the discovery of 1162 new species of flowering plants! Two genera and about 200 species are named for Palmer. His collections of over 100,000 specimens are located throughout the world.

Palmer’s botanical collections (over 100,000 in number) reside at research institutions all over the world including Harvard University, the Smithsonian Institution, Missouri Botanical Garden, The New York Botanic Garden, Royal Botanic Gardens, Kew, and the British Museum. The Palmer collection in the U.S. National Herbarium at the Smithsonian Institution remains the largest, containing over 16,000 botanical specimens collected over sixty years while Palmer worked as a Smithsonian field representative. During that time Palmer also served, at different times, as a Department of Agriculture collector and expert, and a Bureau of Ethnology ethnologist.

Palmer sailed for Isla Guadalupe from San Diego on January 30, 1875 aboard the San Diego, arriving by the first of February. With him was his assistant for the trip, Harry Bye Stewart (1862-1922), the twelve year old son of William W. Stewart, San Diego shipping agent. They remained on the island for nearly four months. Palmer made a second trip to Guadalupe Island in 1889.

Palmer's collections of the endemic Guadalupe Island Caracara largely led them towards extinction. Palmer is known to have collected 24 caracaras.

“1870-1890. Edward Palmer. With the exception of Mr. Brandegee, Dr. Edward Palmer made the most extensive colleciton of plants ever gathered in Lower California. He collected mainly along the coast and on the islands. His first work in Lower California was on Carmen Island, in the gulf, January 1-2, 1870. Twenty years later he revisited Carmen Island and remained for a week (November 1-7, 1890). A report on this collection wsa published by Dr. J. N. Rose. Dr. Palmer was the first naturalist to collect on Guadalupe Island. He remained there from February to May, 1875, and again visited the island from March 27 to April 3, 1889. During his first visit, in addition to a series of plants he made a small collection of bird skins which furnished the types of several new species and first made known the interesting bird life of this island...” [Nelson 1921]

PALMER, Edward “Born at Hockwald-cum-Wilton, near Brandon, Norfolk, England, January 12, 1831; died in Washington, D. C., April 10, 1911. A well known botanist and indefatigable field collector who spent many years in the Southwest, especially in Arizona and Mexico, and brought back rich botanical and zoological collections. He made the first collection of birds on Guadalupe Island, Lower California, and secured many important specimens from the various places he visited. The Curve-billed Thrasher (Toxostoma curvirostris palmeri) described from Tucson, Arizona, now bears his name. This bird has recently been added to the California list, having been taken by L. M. Huey three miles north of Bard, Imperial County, December 31, 1919 (Condor XXII, 1920, p. 73). In the course of his botanical work Dr. Palmer is said to have discovered at least 1162 new species of flowering plants, and 200 bear his name.”

May 21, 1875 [San Diego Union]: “The schooner Coso arrived last evening from Guadalupe Island to W. W. Stewart & Co., bringing up passengers Dr. Palmer, of the Smithsonian Institution, Master Harry Stewart, and two of the men employed on the island. Dr. Palmer has been engaged in collecting specimens of natural history for several weeks past. There has been some sickness among the men on the island, the supply of flour having given out some weeks ago, and an exclusively meat diet having proved unwholesome. The schooner left the men all the flour she could spare, and more will be forwarded immediately.”

1876 [Sereno Watson]: “In 1875 Dr. Palmer visited Guadalupe, an island lying some distance off the coast of Lower California, which had never before been visited by a botanist. His collections on this island revealed a fauna and flora of peculiar interest, connecting it rather with upper California than with the adjacent peninsula. Every bird in his collection except a single sea bird proved to be new to science, though represented by allied forms on the mainland; and among the plants there were twenty-one new species, the greater part of which proved to be peculiar to the island. The account of Dr. Palmer's personal experiences on the island is most interesting, but unfortunately there is not space here to repeat it.

While on the island he lived in a dug-out with a roof of poles covered with dirt. His explorations were attended with much difficulty and for several weeks he was seriously ill. Sometimes in order to secure plants growing on the faces of cliffs, which had been preserved on account of their inaccessible position from the greed of goats, he made use of a noose at the end of a long pole, much to the amusement of the herders, who laughed at the doctor's attempts to "lasso plants." Many of the species could have been secured in no other way. "Goats," he says, "were my only rivals; but they made a clean sweep of everything in reach, not discriminating between what was common and what was rare." ”

August 2, 1876 [SBMP]: “The Island of Guadalupe. Sketch of the Island and Description of its Flora. Contributions to American Botany. On the Flora of Guadalupe Island, Lower California, embracing a List of a Collection of Plants from that Island, made by Dr. Edward Palmer, with his notes. Edited by Sereno Watson. From the Proceedings of the American Academy of Arts and Sciences, Vol. XI. This fresh treatise recites the results of explorations in a virgin field. Dr. Palmer's collection of plants from Guadalupe Island is the only complete list ever made of the flora of that interesting little independent kingdom in the botanical world. He first gives a comprehensive description of the Island, which is quite correct, as this writer can testify from personal knowledge. The Island of Guadalupe is in lat. 29 degrees north, about 100 miles from the coast of Lower California, and 230 west of south from the town of San Diego, which is near the southern line of California. It is twenty-six miles in length in a north and south direction, with an average breadth of ten miles, and is traversed by a mountain ridge, the central peak (Mount Augusta) having an elevation of 3900 feet above the level of the sea. From this point the nearest mainland is visible. The sides of the ridge are exceedingly rough and broken, cut up by numerous deep and rocky canyons, and even the more level surfaces are described as usually covered with rocks of every size and form. The rocks are volcanic, and several extinct craters still exist...”