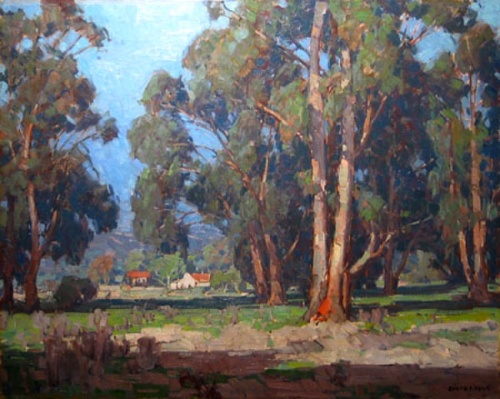 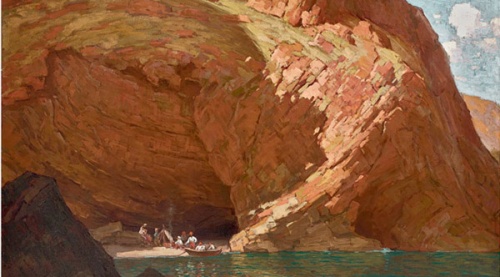 PAYNE, Edgar Alwin (1883-1947), Missouri-born muralist and landscape painter living in Chicago, who first visited California in 1909. While in San Francisco, he met his future wife, artist Elsie Palmer (1884-1971). Payne visited California again in 1911, and in 1912 he reconnected with Elsie Palmer in Chicago, where she had taken a position as a commercial artist. They married on November 9, 1912. In 1915 the Paynes visited California to see Elsie’s parents in San Francisco and to attend the Panama-Pacific Exposition. They then traveled south and stayed in Santa Barbara for a few weeks. The Paynes moved to California and established a studio in Laguna Beach in 1918. Payne is inter-nationally famous for his canvases depicting Indians riding through desert canyons and landscapes of the Sierra Nevada. He painted at large oil of a scene at Cueva Valdez, Santa Cruz Island in 1915, and another through the Eucalyptus trees at the Main Ranch.

June 30, 1915 [SBDI]: “Landscape and marine painters are finding Santa Cruz Island a source of inspiration for their creative efforts. This week there are three artists on the island. Edgar Payne left today on the» Otter for Valdez Cave, and Karl Schmidt and Frederick Rhend are already there. Mr. Payne will stay a week, resting and doing landscape work.”