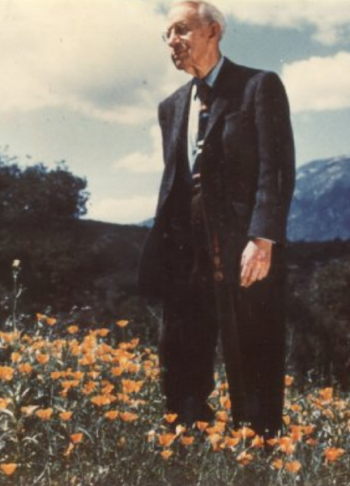 PAYNE, Theodore (1872-1963), English-born horticulturalist who came to Los Angeles County in 1893 and devoted the rest of his life to preserving California native flora. He began his own nursery and seed business in 1903, specializing in native wildflower seeds. During his career he helped design wild flower gardens at many botanic gardens, including those at Exposition Park in Los Angeles, the Blaksley Botanic Garden in Santa Barbara, and at Rancho Santa Ana Botanic Garden in Orange County. The Nature Club of Southern California, led by Ralph Hoffmann, took a field trip to Santa Cruz Island the weekend of September 1-3, 1928. As reported in the Santa Barbara Museum of Natural History Leaflet October 1928, during this trip, Theodore Payne was “filling paper bags with seeds of Eriogonum arborescens, a shrub particular to the islands.” Payne served as a director of the Southern California Academy of Sciences. Payne left as his legacy the non-profit Theodore Payne Foundation, located on twenty-two acres in Sun Valley, north of Los Angeles.

September 1928: “…We reached Pelican Bay and Eaton’s camp in time for lunch. There is no beach here and we were taken ashore in row boats which landed up onto a wooden platform, then we climbed a lot of steps up to the camp. Our luggage was pulled up with a cable. The dining room was a long building looking out over the ocean. Cabins and tents were scattered around in different directions. Mrs. Payne and I had a cabin just a short distance from headquarters. There were no roads and, of course, no automobiles. Trails led to different parts of the island… The total charge to each one was $12.85. This included transportation both ways, two night’s lodging and seven meals, and the meals were good. It was one of the most enjoyable trips I have ever had and certainly the least expensive.”