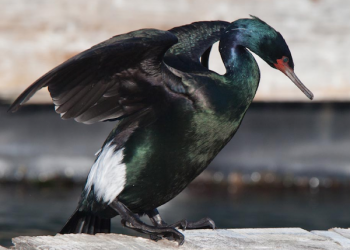 “Pelagic Cormorant (Phalacrocorax pelagicus) is the smallest of the cormorants found in the North Pacific, where it nests from Japan through Alaska to Northern Baja California (Palmer 1962). Pelagic Cormorants nest colonially on ledges and small crannies situated on inaccessible cliff faces; their colonies are usually smaller and much more scattered than Brandt's or Double-crested Cormorants. This species has nested on five of the Channel Islands, with most of the breeding colonies located in the northwesternmost islands. They no not nest on Santa Catalina, San Nicolas or San Clemente Islands... Pelagic Cormorants (Phalacrocorax pelagicus) were found by most early investigators at San Miguel Island, though again, few mentioned the numbers of birds present. Appleton (unpubl. notes) found 12 nests on “sea cliffs, away from other Cormorant spp.” and collected three sets of eggs on 6 June (one set of which is now at WFVZ 65939). Willett (1910) commented that they were ”breeding commonly on the cliffs everywhere” at San Miguel Island in June 1910. His party took one set of eggs each on 11 and 14 June (WFVZ uncat.). Wright and Snyder (1913), however, made no mention of it here when they visited on 11-13 July 1912. Pemberton (unpubl. notes in WFVZ) saw several pairs and took one egg set on 3 June 1928. Sheffler also took one set on 11 June 1933 (WFVZ 2919). Sumner (1939) observed about 50 individuals on Prince Island in mid-April 1939, but breeding activities were just beginning at that time. Craig and Sheppard (unpubl. notes) observed 250 pairs on Prince Island on 3-5 July 1965. In 1968 the P.O.B.S.P. (Huber 1968) counted five nests on Prince Island, 25 nests on Castle Rock and 100 nests on the main island.” [Marine Mammal and Seabird Survey of the Southern California Bight, Volume 3, Issue 3. University of California Santa Cruz et al., July 1978]”

1907 San Clemente Island: “Phalacrocorax pelagicus resplendens. Baird Cormorant. A few pairs were seen near Mosquito Harbor, during March. These were in breeding plumage (white flank patches). One specimen in winter plumage, taken in October. ” [“Visits were made to Clemente in January, February, March, April and October, 1907.”]
Linton, C. B. Notes from San Clemente Island The Condor 10:82-86, March 1908

1984 San Clemente Island: “PELAGIC CORMORANT (Phalacrocorax pelagicus). Uncommon year-round, no breeding records. Breninger (1904) said "they were reported to have nested," but he furnished no evidence.”
The Birds of San Clemente Island, 1984

1897 Santa Barbara Island: “Phalacrocorax pelagicus resplendens—Baird's Cormorant. This Cormorant was seen only at Santa Barbara Island, where it was nesting in smaller numbers than either of the other species. The nests were unique, in always being inaccessible. They were built either on a narrow projection of rock, or in a niche on the face of a cliff. Seldom more than two or three nests were seen in any one place. The birds were apparently incubating. Two specimens of the Baird's Cormorant were taken... Entire List of Water-Birds Observed. [March 26-April 4; May 11-June 9]. The party [of the second trip] consisted of Joseph Grinnell, who had immediate charge of the expedition, and gave special attention to the ornithology and entomology of the islands; Horace Gaylord, who collected mammals; and Harry Gaylord and James Brittan [Britton] who devoted their time to archaeology. The party left San Pedro harbor May 11 in a large fishing schooner... [returning June 9, 1897]”
Grinnell, Joseph The Islands of Santa Barbara, San Nicolas and San Clemente, in the Spring of 1897 Pasadena Academy of Sciences Publication No. 1, August, 1897 (26 pages).

1907 Santa Cruz Island: “Phalacrocorax pelagicus resplendens. Baird Cormorant. Common.” [“At 11:30 p. m., November 19, 1907, my father (H. Linton), Mr. George Willett, and myself left San Pedro harbor in a dilapidated fishing smack and in company with a crawfisherman, one “Cold-foot” Jorgensen. We arrived off the south end of Santa Cruz Island at 10:30 the following day during a stiff norwester. For various reasons we were unable to make camp until the 22nd. It may not be amiss to state here that twice during the blow we were nearly wrecked: once while at anchor in Potatoe Harbor, a broken anchor allowing the boat to drift within the breaker line and nearly onto the rocks. In this instance the timely arrival of Willett and H. Linton in a small boat, saved the day, and incidentally the fishing smack. At another time (the engine having broken down) we were blown nearly onto the rocks of Anacapa Island; but with father at the wheel and Willett and I on the “sheet” we managed to hold her off. I mention the foregoing, and the many sleepless nights spent on the rocky shores, “running” the surf several times each day (with attendant duckings), etc., merely as a warning to those who seem inclined to believe a field naturalists ’ life “strewn with roses”. (Its ’ generally strewn with cacti!)”]
Linton, C. B. Notes from Santa Cruz Island] The Condor 10(3):124-129, May 1908

1927 Santa Rosa Island: “Phalacrocorax pelagicus resplendens. Baird Cormorant. Many of these two cormorants [Brandt Cormorant] were seen on April 3. Both species were observed nesting on San Miguel and Santa Barbara islands and no doubt were nesting here also.” [“Through the generosity of Mr. Silsby M. Spalding who placed at our disposal his splendid cruiser Padariva I the writer accompanied by H. W. Carriger, Dudley DeGroot and 0. W. Howard was enabled to spend the period from March 25 to April 5, 1927, inclusive, among the Channel Islands off the coast of southern California.”]
Pemberton, J. R. Additions to the known avifauna of the Santa Barbara Islands The Condor 30(2):144-148, March-April 1928