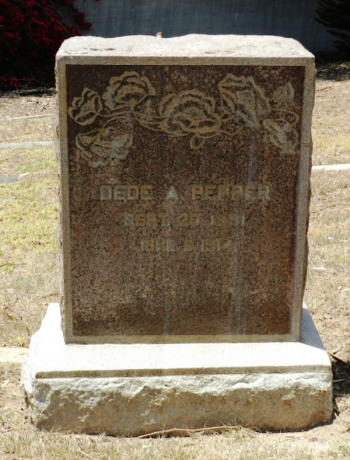 November 30, 1913 [LAT]: “A double wedding Thursday morning at the home of Mr. and Mrs. F. G. Seegert was one of the delightful incidents of Thanksgiving Day. The bridal parties were Robert Bruce Mitchell, who married Miss Jessie Colwell, and Frank Pepper, whose bride was Miss Dede Libbey. Both ceremonies were performed by Rev. George C., Wright. The couples started the same day on a honeymoon by automobile, intending to visit Los Angeles and other southern cities. Mr. and Mrs. Pepper will make their home on Santa Cruz Island, where Mr. Pepper is the superintendent .”

December 16, 1913 [SBMP]: “Mr. and Mrs. Frank Pepper will meet this evening in the Women’s Clubhouse to enjoy the second half of the study of the opera Natoma, by Victor Herbert. The setting of the delightful story being in this city and on the nearby islands makes the meeting one of special interest. Those who will be on the program this evening are Mrs. Charles Tomlinson, Mrs. Virginia Lee Boyce, Mrs. G. K. Freeman and the Misses Audrey Turner, Ruth Evarts and Ella Alice Gross. The meeting will begin promptly at 7:45.”

June 8, 1914 [SBMP]: “Bride ends life with bullet in heart. Mrs. Pepper commits suicide on island. Was soon to have become a mother. Mental derangement given as cause. Mrs. Frank Pepper, the young wife of the superintendent of Santa Rosa Island, ended her life late Saturday night by shooting herself through the heart with a rifle. The body was brought here yesterday morning and taken to the Charles McDermott undertaking parlor, where Coroner A. M. Ruis is holding an inquest this afternoon. About two weeks ago the Peppers went to the island where the tragedy occurred. Mrs. Pepper was soon to become a mother. They were accompanied by Miss Grace Clark, a graduate nurse, who, as a friend of Mrs. Pepper, was to spend a short time with then on the island. For many weeks Mrs. Pepper had shown signs of suicidal tendency and had threatened to take her life, imagining that she was being mistreated. She also is said to have developed a determined opposition to having a child and declared she would destroy herself before becoming a mother. The story of the tragedy is substantially as follows. Saturday night after all had retired, Mrs. Pepper awoke in a high state of excitement. She ordered her husband out of the room, and he dressed and left the house, thinking that after a short time she would clam down. Miss Clark heard the unfortunate woman leave her room and go to another part of the house, and then return, twice doing this. The second time she sat at the head of a flight of steps and called to Pepper to come in. He approached and quietly placed a hand on her shoulder, he says, and she ordered him not to touch her, and threw his hand off. She then returned to their room and closed the door. He followed a moment or two later, and just as he was entering the house a shot was heard. Miss Clark ran to the room, Pepper following her, and they entered only to find the woman lying back on the bed dead. She had placed the rifle to her breast and fired. Death came instantly... The investigation disclosed that the woman had written two farewell messages. The first one she tore into bits and threw into a receptacle containing water. As it was written in indelible pencil, the letters ran together when the paper became wet and cannot be deciphered. The other message is in the hands of the coroner. It is an attack on her husband and shows a mind particularly affected by her physical condition. It is declared that Mrs. Pepper had for months vowed she would not have a child and that she at times become greatly excited when making these declarations... Two of the Vail brothers, owners of Santa Rosa Island, visited Sheriff Stewart this morning, and both spoke highly of Pepper and of his treatment to his wife. Similar statements were made by Miss Clark. The accepted opinion is that the woman’s physical condition had developed a temporary mental trouble, which made her melancholy and excitable. Sam McCoy, the cook who was in the house at the time of the tragedy, came over this morning to be a witness at the hearing.”

June 9, 1914 [SBMP]: “Motherhood fears cause of suicide. Impelled by a spirit of revolt against her prospect of becoming a mother, and without doubt during a period of temporary insanity, shortly after 11 o’clock last Saturday night, Mrs. Dede Libbey Pepper, wife of Frank Pepper, superintendent of Santa Rosa Island, shot herself to death with a rifle in the ranch house on the island. She was 23 years old. The only people in the house at the time aside from Mrs. Pepper, who had gone to bed in her room, were Mr. Pepper, who was in an adjoining room, and Miss Grace Clark, a Cottage Hospital nurse, who had gone to the island with Mr. And Mrs. Pepper, to nurse the latter, and who occupied a bedroom near her patient, all of these rooms being on the second floor of the building. Mrs. Pepper had been in a fretful and petulant mood throughout the evening. Only a short time before her husband had been in her room, and she became much excited and ordered him to leave. Thinking that she would soon become pacified, he went out for a short walk, and then reentered the house and went to his own room. Very soon thereafter a shot was heard, and the husband and nurse instantly divined the cause. They rushed into Mrs. Pepper’s room, when their fears were proved true. The body was brought to Santa Barbara at an early hour Sunday morning and taken to McDermott’s undertaking parlors, and the coroner was notified. Coroner Ruiz conducted an inquest in the afternoon at the McDermott undertaking rooms. The principal witnesses were Miss Clark, Mr. Pepper, Dr. E. J. Boeseke, who had conducted the autopsy, and a few others. The jury was composed of E. C. Overman, foreman; J. J. McKeel, H. R. F. Vail, Adrian Raffour, George G. Robbins, F. A. Carrillo, E. P. Stevens, Charles Gandolfo, George N. Bodie, A. C. Greenwell and W. J. McCaffrey. Within a very few moments after retiring to deliberate upon the evidence, the jury returned a verdict finding that the deceased had come to her death "From a gunshot wound self-inflicted with a suicidal intent, during a moment of temporary mental aberration." The funeral will be held this afternoon at 2:30 o'clock, from McDermott's undertaking parlors. Rev. George A. Warner of Goleta will officiate. While the services will be of a private nature, personal friends of the family are invited. The interment will be in Santa Barbara Cemetery. ”

June 9, 1914 [LAT/SB]: “The coroner’s jury late this afternoon rendered a verdict of suicide in the case of Mrs. Pepper, who shot herself in the big ranch house on Santa Rosa Island Saturday night. Pepper, who has been superintendent of Santa Rosa Island for fifteen years, and who is esteemed by all who know him in Santa Barbara, almost collapsed on the witness stand this afternoon. It was due to the demand by Mrs. Pepper’s mother that the inquest was so rigid, she having stated her belief that her daughter did not kill herself. When asked to relate the circumstances, Pepper broke down, and it was with great difficulty that he managed to make himself clear to the jury. ‘I loved her more than my own life,’ said the husband, ‘and I don’t see how anyone could suspect foul play.’ Mrs. Pepper was only 23 years old while her husband is about twice that age. She was soon to become a mother, and the jury found that she killed herself in a moment of temporary aberration. The funeral will be held tomorrow.”

June 10, 1914 [SBMP]: “The funeral of Mrs. Dede Pepper, wife of Frank Pepper, who committed suicide at Santa Rosa Island last Saturday night, was held yesterday afternoon from McDermott’s undertaking parlors, and was attended by many friends of the deceased and Mr. Pepper. There were many beautiful floral offerings. The services were conducted by Reverend George A. Warner of Goleta. Internment was in Santa Barbara Cemetery.”