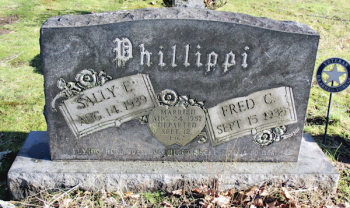 September 13, 1967 [LAT]: “4 Die in Catalina Air Crash. Four persons were killed Tuesday when their single-engine light plane smashed into the side of the 1,520 foot plateau containing the Catalina Airport on Catalina Island. The victims were identified as the pilot, Frederick Phillippi, 28, of 5002 Newton St., Torrance; his wife Sally, 27, and her parents, GIlbert and Arlene Renbarger, both about 60, of Buchanan, Mich. The Phillippis were believed to have three small children who had been left with friends while the parents and grandparents flew off for an island vacation. The sheriff's unit on the island said the plane hit the northeast side of the plateau, about 200 feet below the level of the runway, while attempting a landing shortly after 1:30 p.m. The plane hit about a quarter-mile from the end of the runway, a land locked version of an aircraft carrier's flight deck that had been build on what had once been the island's highest peak.”

September 13, 1967 [Sacramento Bee]: “Plane Crash On Catalina Kills 4. Avalon, Los Angeles Co.—Two Californians and a Michigan couple were killed on Catalina Island in the crash of their light plane while trying to land. The dead were identified by sheriff's officers nine hours after the crash, yesterdat as Fred C. Phillippe, 28, and his wife, Sally, 27, of Torrance, Los Angeles Co., and her parents, Mr. and Mrs. Gilbert Renbarger of Buchanan, Mich. Officials at the Catalina Island hilltop airport said the plane was about 500 feet above the airport when it suddenly flipped into a nose dive and crashed.”