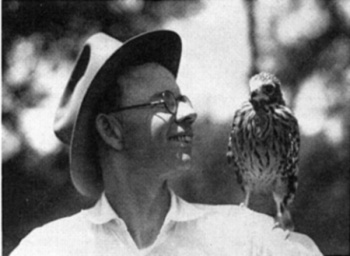 PIERCE, Wright M. (1886-1937), ornithologist who assisted William Leon Dawson with The Birds of California, A Complete, Scientific and Popular Account of the 580 Species and Subspecies of Birds Found in the State, Four Volumes.

“One of Wright Pierce's most outstanding qualities was his desire to help and befriend young naturalists. His spring field trips into the desert region of southern California were high points in the experience of those fortunate to accompany him. Possessed of a keen eye, he could spot a motionless bird or a nest half hidden in the foliage long before most people would catch sight of it...” (Condor XXXIX July 1937 p.179)