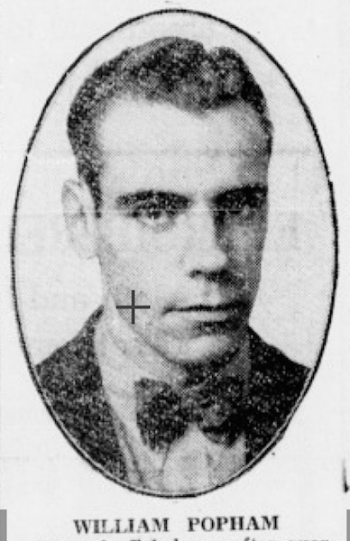 POPHAM, William C. (c. 1914-1936), Stanford University student, leaped 120 feet to his death from the balcony of the Casino at Avalon, Santa Catalina Island during a dance. Popham attended the dance with his roommate, Gene Ernest. Apparently he was despondent that Audrey Roberta Wagner, of Long Beach, whom he had known for some time, wasn't interested in attending the dance with him.

September 9, 1936 [Healdsburg Tribune]: “Stanford man a suicide at Island resort. Leaps while music plays his girl's "favorite." Los Angeles, Sept. 9. — While the dance orchestra played a melody that haunted him with the memory of of his sweetheart, William Popham, 24 year old Stanford senior, leaped to his death from a high balcony at the casino at Avalon, Catalina Island, according to a report to the sheriff's office today. Geane Ernest of Los Angeles, who has roomed with Popham at the resort, told authorities that Popham went to the dance alone after his sweetheart had refused to go and jumped off the balcony when the orchestra played the girl's "favorite" melody. Authorities reported the Melvin Hayes, a friend, attempted to restrain the victim but he eluded Hayes grasp, scrambled a six foot railing and jumped. The youth had planned to return to Stanford next week to complete his studies. He was majoring in economics. His father, J. S. Popham, a salesman for an aluminum company, was on a business trip in northern California and relatives today were making an effort to notify him of his son's death.”

September 9, 1936 [Santa Cruz Evening News]: “Stanford Junior, jilted, suicides in Catalina leap. Avalon, Santa Catalina Island, Calif., Sept. 9 — William Popham, 22, Stanford University student, leaped 120 feet from the balcony of the Casino here to his death on the rocks below, Chief of Police Don Alger said today. Popham, who had finished his junior year at Stanford and expected to be graduated next June, lived in Long Beach but had spent the summer here working in a grocery store. Constable Leo Morizich [sic] said that after talking to several of Popham's friends he was convinced he leaped in a fit of despair because the girl he admired went to the Casino to dance with another man.”

September 10, 1936 [LAT]: “Love Figures in Death Leap. Avalon Police Report Stanford Senior's Act Caused by Despondency. Unrequited love caused William Popham, 22-year-old Stanford University senior, of 623 Miramar Avenue, Long Beach, to leap to his death Monday night from the balcony of the Casino at Avalon, according to Chief of Police, Don Alger, of Avalon. Gene Eernest, of Los Angeles, who was rooming with Popham at Avalon, told police his roommate was in love with Audrey Roberta Wagner, 118 Locust Avenue, Long Beach, and that he was despondent Monday night when she declined to accompany him to a dance at the Casino. He attributed Popham's act to despondency over the love affair. Miss Wagner yesterday denied she was engaged to Popham, but said they had been good friends for two years.

September 10, 1936 [SF Chronicle]: “Love Lost, He Kills Self. While his estranged girl friend was dancing in the arms of another man, William C. Popham, 22, Stanford student, gulped the remains of a pint of liquor, then rushed out to the balcony of the Casino at Avalon, Santa Catalina Island, Tuesday night and hurled himself 120 feet to death on the rocks below. Word of the tragedy was received here yesterday via Associated Press.Young Popham, majoring in economics, had finished his junior year and expected to be graduated next June. His home was in Long Beach, but he had been working in an Avalon grocery store during the summer. Friends told authorities the Stanford student had quarreled Labor day with an attractive girl acquaintance whose identity they declined to reveal. She went to the dance hall with another youth Tuesday night and young Popham followed. He had just come from a restaurant, where he ate lightly, tipped four waitresses $1 each and bought a pint of liquor. He stood watching the girl silently as she danced. As midnight approached the orchestra struck up "Would You?" a popular tune that had become the theme song of the couple's ill-starred romance. Young Popham went to the bar, ordered soda, dumped the remains of his whisky into it and drank it off. Then, flinging a dollar bill on the counter, he dashed to the balcony and leaped over the rail. Two friends had been observing his actions. One of them attempted to grab his coat tail but missed.”

September 10, 1936 [San Diego Union]: “Stanford Pupil Catalina Suicide. Long Beach, Sept. 9.—A 22-year-old Stanford university student, William Popham, came back from his vacation on Catalina Island today, but not to return to the university for his last college year, as he had planned. Instead, he was brought back dead. The youth last night jumped 120 feet from the balcony of the casino at Avalon, on the island, to his death on the rocks below. a report made to the coroner's office by Constable Lucas Moricich of Avalon said it was a case of suicide because of a lovers' quarrel.”

September 29, 1936 [The Stanford Daily]: “Stanford senior commits suicide. Because of a quarrel with a girl, William Popham, Stanford student, jumped from the balcony of the Casino at Avalon, Santa Catalina Island, two weeks ago and was killed on the rocks below. Popham was majoring in economics and would have been a senior this quarter. He transferred in 1935 to Stanford, and while here worked at Wilson's at the counter. His home was in Long Beach. Friends revealed that the Stanford man had quarreled with an unidentified girl acquaintance on Labor Day. She attended a dance with another youth on the night of the suicide. Popham, who had just come from a restaurant where he ate lightly and tipped four waitresses $1 each, stood watching the copule. Near midnight he walked to the bar, ordered a drink, flung down a dollar bill, and plunged over the balcony. Friends attempted to stop him, but were too late.”