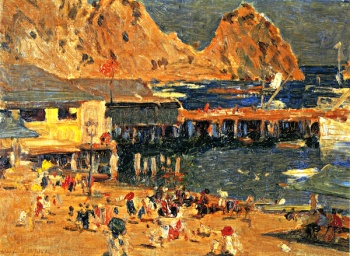 POTTHAST, Edward Henry (1857-1927), born in Cincinatti, Ohio, the son of a cabinetmaker, he became a well known impressionist painter, known especially for his paintings of people at leisure in Central Park and on the beaches of New York and New England. As a boy, he was a prolific sketcher, filling the margins of his schoolbooks with drawings. In 1870, he was enrolled at the McMicken School of Design, later to become part of the Art Academy of Cincinnati. In 1873, at age 16, Potthast was apprenticed to a lithographer and later worked for the Krebs Lithography Company and the renowned Strobridge Lithography Company, both in Cincinnati. By 1881, he was listed in the city directory as an "artist." Until the age of thirty-nine Potthast earned a living as a lithographer. The purchase of one of his paintings by the Cincinnati Museum of Art may have encouraged him to abandon lithography for a career as a fine artist.

In 1910, the Santa Fe Railroad invited five prominent artists to travel to the Grand Canyon to paint its natural beauty. Potthast was selected, along with Thomas Moran, the great painter of the West's natural wonders. As the Santa Fe line ended at Los Angeles, Potthast may have visited the beaches of Santa Monica and possibly traveled across the bay to Avalon. Later, he went west again, touring through Arizona and going up to the Canadian Rockies. In 1915, he exhibited at the Panama-Pacific International Exposition in San Francisco.

April 1917 and America's involvement in World War I found Potthast working for the War Department, painting naval targets and producing patriotic illustrations and posters for the home front. After the war and into the 1920s, he continued to paint beach and park scenes in his popular, vivid Impressionist style.

Potthast was a tireless painter, always sketching and painting. He died in his studio in New York on March 9, 1927 of a heart attack. He was nearly 70 years old.