PRENTISS [PRENTICE], Samuel (c. 1784-1856), native of Massachusetts, who served as a cabin boy aboard the bark Danube, wrecked at Point Firmin in December 1828. In January 1829 he crossed the channel in a small boat, landing on Santa Catalina Island at Emerald Bay, previously known as Johnson’s Landing, in search of buried treasure. He stayed for the next three decades [January 13, 1955, TI].

Prentiss died on Santa Catalina Island on June 27, 1854. After his death, the Johnson brothers lived at the anchorage that now bears their name. 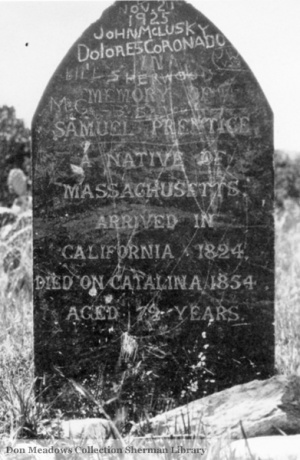 1828: Michael White arrives in San Pedro to salvage the brig Danube. “An American brig called the Danube was wrecked at San Pedro on Christmas Eve and Captain De la Guerra bought her. I had a cousin named Henry Paine whom I had seen once in La Paz and met in Santa Barbara when I got there in 1828. He was chief carpenter in constructing the schooner. The Captain, prior to buying the Danube, had sent him to San Pedro to survey the wreck, get her off, and put such repairs on her as might be necessary. He went to San Pedro and she proved to be a splendid vessel, but could not be got off. I went afterward to San Pedro; started on 30 December and got there on New Year’s Eve. We had everything ready to get her off, and were waiting for the tide to rise, when a gale came on and brought her high and dry. She got on the top of the bank so that I could walk off her bowsprit on the shore. She was knocked all to pieces, and we saved all the materials and built a schooner out of them [launched at Santa Barbara]. She was named the Santa Barbara, and was the first vessel ever built in California. She was placed under command of a man called Thomas Robinson, a Nantucket man [who was granted Santa Catalina Island in 1846].” /2010/12/december-in-san-pedro.html

Samuel Prentiss, a native of Rhode Island, was one of the crew of the American brig Danube that was wrecked in San Pedro Bay on Christmas Eve, 1828, and came with the rescued crew to Los Angeles. He engaged in otter hunting and fishing. He died on the island of Santa Catalina in 1865 and was buried there. Michael White was a native of Kent, England. He landed in Lower California in 1817 and spent eight years as a sailor on trading vessels in the Gulf of California. He went to the Sandwich Islands in 1826 and came from thereto California as commander of the brig Dolly in 1828. He settled in Santa Barbara and built a schooner there. He came to Los Angeles the last day of the year 1828. He married Maria del Rosario Guillen, daughter of Eulalia Perez, famous in the annals of San Gabriel Mission. He was grantee of the Muscupiabe Rancho, near San Bernardino. He was one of the Chino prisoners. His later years were spent in this city, where he died in poverty in 1885. 2068/0690074.txt

July 17, 1856 [SBG]: “Died on the 27th ult., on the Island of Santa Catalina, Mr. Samuel Prentice, aged 83 years. The deceased was an otter hunter and had been in the country thirty years. He was buried on the island.”

June 12, 1864 [DAC]: “Letter from Santa Catalina Island. June 3rd, 1864... Wilson's Valley [Emerald Cove], a mile further westward [from Howland's Landing], is the largest and most pleasant of the three last named [Fourth of July Valley; Cherry Valley; Howland's Valley]. It has a fine beach in front, and equals Howland's in its water privileges. Its proprietor, after whom it is named, is a man of some wealth, and has been located here with his family for quite a number of years. His sheep and goats range the mountains undisturbed, and at the proper season of the year return to yield him their golden fleeces. The only grave I saw upon the island was at this place. Opposite his residence, scarcely a furlong distant, on a pleasant slope near the seashore, is a solitary grave, surrounded by pickets painted dark brown. The lonely occupant of that small enclosure doubtless sleeps well. I looked upon it and sighed, wondering if his days had been spent in toiling—mining—or busy trade: envied the lot of the sleeper, and passed on to the shore, to hold communion with the deep, dark, rolling, restless sea...”

October 6, 1899 [LAT]: “Maj. H. T. Lee came down from Johnson's Landing yesterday, after a month in camp there. He will return to Los Angeles tomorrow. Maj. Lee brought with his a headboard which since 1854 has marked the last resting place of one of Catalina's earliest white pioneers. The grave was enclosed by a neat picket fence, but the ravages of time have destroyed the enclosure, and that the headboard might not be also destroyed, the major brought it down and left it at Hotel Metropole. It will probably be replaced and the fence restored. The inscription reads:

“In memory of Samuel Prentice, a native of Massachussetts. Arrived in California 1824. Died on Catalina 1854. Aged 72 years.”

The letters are neatly burned in a redwood board.

July 8, 1931 [TI/Avalon]: “…Prior to 1864, quite a number of mining men occupied various coves at the west end of the Island. Other inhabitants, not interested in mining, but ostensibly employed in fishing and otter hunting, frequently found Catalina their ‘Island Home’… Before the signing of the Guadalupe Treaty, 1848, there were not many Americans in California… Just what brought the bark Danube from New York to the Pacific Coast in 1824 [December 1928], when it was wrecked near San Pedro, has never been made an important fact in history. This much is known, however, that Samuel Prentiss was one of the survivors of the wreck, and that he was one of the first American-born seamen to establish a permanent residence on Catalina Island. Later Prentiss built a small cabin on the west side of a little cove now known as Johnson’s Landing. After the Danube wreck, history records that Prentiss and his companions walked from the disaster to San Gabriel Mission, where they remained for several days. At the Mission Prentiss became acquainted with one of the Indians, who told him of the treasure that had been buried on Catalina Island. There are two stories concerning the treasure. One, that the Indian himself buried the property of the Catalina tribe of Indians before they were taken to San Gabriel Mission in 1821; the other, that the treasure was ‘loot and plunder’ that had been stolen from the missions of Mexico. That the Indian had convinced Prentiss of the sincerity of his information is authenticated by the fact that Prentiss searched diligently for it for almost thirty years. While he was crossing the channel in a small sailboat with the crude map given him by the Catalina Indian, Prentiss had the misfortune to encounter stormy weather for three days, during which most of his supplies and personal belongings, including the map, were washed overboard. Arriving at the island he was unable to determine whether the treasure was buried at what is now known as Johnson’s Landing, or at Timm’s Landing [Avalon], somewhere in the vicinity of the old banyan tree which formerly grew near a spring on the south side of Claressa Avenue. It is said that Prentiss did not reveal his true mission on the island until a short time before his death. He then gave the information to Santos, said to be the son of his old shipmate, Santos Louis Bouchette. (Bouchette the younger often spelled his name as Bochard, and used the prefix Louis. He also used the name of ‘William’ when it suited his convenience.) The following inscription at Johnson’s Landing marks the grave of Samuel Prentiss:

Samuel Prentiss was well educated. His family in the east made several attempts to persuade him to return. With the zeal of a gold prospector he searched for the treasure, often existing for days at a time on fish and a few vegetables and figs that he grew near his cabin. Occasionally he would capture a white otter, which he disposed of to masters of vessels calling at the Island to purchase firewood. Prentiss never participated in the ‘smuggling activities,’ and because he was so friendly and good natured, one of his mining acquaintances carved the board with the inscription and placed it on his grave. Years later the board was replaced with a tablet of stone, a donation by Judge J. B. Banning.

February 21, 1932 [LAT]: “…Shortly after the gold rush settlers began to take up squatters’ rights at Catalina. John Benn and his Spanish wife, Samuel Prentiss, the Johnson brothers, and Captain and Mrs. Howland were among these. The first American child to be born on Catalina was William Percival Howland, on April 8, 1866. However, these claims were abandoned when it was discovered that the United States never had owned the place…”