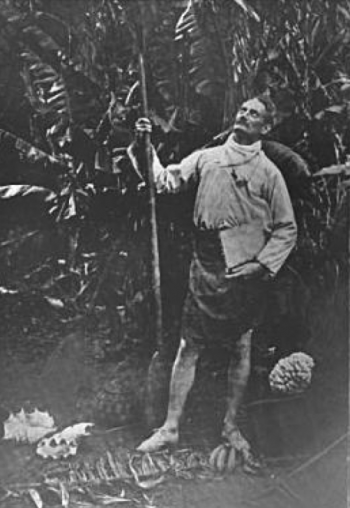 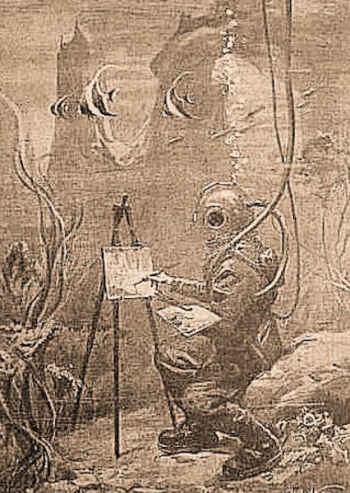 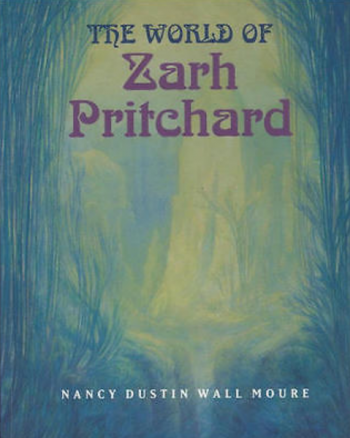 PRITCHARD, Zahr [Walter Howlison Mackenzie] (1866-1956), painter of undersea scenes. He was born in Madras, India and sent to Scotland for school at age ten. He began sketching underwater scenes there at an early age. After designing a gown for Sarah Bernhardt with an underwater theme, he began selling his works. He arrived in San Francisco in 1906 where he lost 50 works in the earthquake, after which he moved to Los Angeles, where he remained off and on until 1937. He changed his first name to Zahr in about 1909.

Pritchard submerged himself in a bulky diver's dry suit with metal helmet, air hose, and weighted boots so he could paint underwater scenes. He used leather as a canvas and oil-based crayons to draw. His biographer, Elizabeth Shor, states:

“Pritchard created the art of portraying underwater scenes by sketching them from life. In the early 1900s he produced beautiful illustrations of tropical marine fishes and coral landscapes in the true pastel shades known well to divers. His paintings were praised and purchased by royalty and by natural-history museums, and were exhibited worldwide in art galleries. He held exhibits of his paintings in Tokyo (1919, 1920), Paris (1921, 1925), Rio de Janeiro (1922); London (1928); New York (1913); Honolulu, Pasadena, and several other cities in the United States. Critics and journalists praised his works as harmonious, dreamy, poetic, restful. As an artist, Pritchard was not a member of any of the art movements of the day — cubism, expressionism, impressionism. Outside the realm of the critics of his day, his works were often described as "pleasing" (Burgess, 1994, pp. 155-158). They sold fairly well, especially to the "nouveau riche." An art critic dubbed him "The Merman," a title that he enjoyed (Burgess, 1994, p. 138).

The tide turned after a few years when he began to be recognized as a naturalist painter. He was mentioned by National Geographic and featured in Scientific American. Then he gave lectures about his techniques and the underwater world itself at significant natural-history museums in the United States — the aquarium of the New York Zoological Society, the California Academy of Sciences, Scripps Institution for Biological Research. Scientists and donors responded enthusiastically, and praised his pictures for their accuracy. The American Museum of Natural History in New York obtained 9 of his paintings for their new Hall of Ocean Life in 1924. The Cleveland Museum of Natural History in Ohio also acquired 9 paintings. Scripps Institution of Oceanography in La Jolla, California received three of Pritchard's paintings from Ellen B. Scripps in 1917, following a talk by Pritchard in San Diego. (Prices penciled on the back of these range from $200 to $450.) At a 1921 exhibit in Paris, Prince Albert I of Monaco "warmly thanked him for having revealed to the great public the glories of the undersea, which the Prince himself only knew from descriptions furnished by his divers during the forty years of their descents in different seas" (Nicholson, 1926, p. 4) The Prince then purchased 11 of Prichard's pictures for the Musée Océanographique. In 1925 Pritchard was awarded the Decoration of the Palmes académique while holding an exhibit in Paris. At that time three paintings were purchased for the Museum of the Luxembourg in Paris.”

March 17, 1905 [SBMP]: “Walter Pritchard and José V. Giles, two members of the London Arts and Crafts Association, are exhibiting at Paul Elder’s rooms in this city, work of great and unusual interest. Mr. Pritchard, who is the son of a British officer and was born in India; and Mr. Giles, of English birth, have been almost two years in America, their whole time being spent in California. Their work, so far as its material side is concerned, is painting upon leather through the medium of a process only known to them… It may lend an additional interest to citizens and winter residents of this town, when looking at these submarine pictures, to know that the wonderful lights and colors that are found deep down in the clear blue of the waters of the channel round about the island of Santa Cruz have been caught and held by Mr. Pritchard in these panels. Both painters spent some weeks upon Santa Cruz Island and profited by the magic charm of the island, its wonderful caverns, and the indescribable beauty that lies beneath the kelp-strewn surface of the sea…”

May 11, 1906 [SBMP]: “Artist who paints under the waters. Walter H. Pritchard, who for some time past has resided in Mission canyon, has attracted considerable attention lately with his paintings of submarine scenes. Mr. Pritchard's friends here have long appreciated his work in this virgin field, but it is only recently that the outside world has been given a chance to share in this appreciation. The Los Angeles Times of Sunday last contains a long account of Mr. Pritchard's work and the methods which he employs. The following extracts from the article can not fail to interest Santa Barbara People: "There has recently come to Los Angeles, from Santa Barbara, a young Irishman who has been a 'merman bold', not once but many times, though his stay at the bottom of the sea has almost always been short—about three-quarters of a minute, to be exact. Walter H. Pritchard is an artist as well as an Irishman, a fortunate combination, as your logic will tell you and the sequel will prove. He not only went to the bottom of the sea, but he also painted pictures there, using five or six colors. Impossible? Wait and see. Mr. Pritchard is an Irishman, remember, which is almost as good as being an American. He is also an artist, and artists are the great inventors, whether born in Cork or New York. So Mr. Pritchard invented a canvas that would sink—it was oiled paper pasted on a sheet of glass. He invented goggles that were hermetically sealed. Then, as nude as Tennyson's merman, he wrapped a long strip of cloth called a pareu around his waist several times, suspended a piece of coral weighing about forty pounds between his legs, floated downward, and inspected the view, leaving his sketch glass below when he shot back to upper air. The coral weight was hauled up by his helpers, for it had a convenient string attachment. Returning again to the submarine fields, he seated himself on the chunk of coral and began to sketch the wonderful things he saw, using the pencils he had brought with him. Nothing, you will observe, is impossible to the Irishman who has also the added good luck to be born an artist. His sketches done—the most of them were made at Tahita (sic), where the queen's brother was his good friend and enthusiastic co-worker,—an added difficulty presented itself. Oils on a canvas would not adequately express the exquisite gradations of color that had dazed his eyes. There is no feeling of wetness when one is below the surface of the sea. The domain of the merman has an atmosphere of its own. How shall it be expressed? After long experimentation, Mr. Pritchard found that brilliant dry pigments in the form of a powder, when applied to a piece of chamois leather, then modified by degrees, would give the exact effect he was after. This painted, Mr. Pritchard's pictures of landscapes under the sea are wonderfully harmonious and beautiful, symphonies of tone, dreamy, poetic, restful—no more like the scenes one looks at from a glass bottom boat than a view from a balloon is like the Sierra canyons we traverse on foot with raptured eyes.”

c. 1913: “...A heavy northwest wind and swells outside, the Gussie M arrived in the bay [Pelican Bay, Santa Cruz Island]. Captain Vasquez came ashore with an artist, who said he had put on a diving suit and helmet, and dove down into the ocean around the marine gardens. He had with him waterproof crayons and sketchbooks, and the scenes at the bottom of the ocean were beautiful. He said he would finish them in his studio...” [Eaton, Margaret Diary of a Sea Captain's Wife, Tales of Santa Cruz Island, Santa Barbara, McNally Loftin, 1980 p. 189].

June 1, 1916 [SBMP]: “Santa Barbara friends of Zahr H. Pritchard, painter of underwater landscapes, have received cards to an exhibition of Mr. Pritchard's pictures which is now on in New York city, running from May 22 to June 10, at the American Museum of Natural History, and a later showing at the Aquarium, Battery Park June 12 to June 26. It will be remembered that Mr. Pritchard has a studio here twelve or thirteen years ago. He left to go to Tahiti for the purpose of painting underwater sea pictures. A number of his pieces were shown at the Panama-Pacific exposition. This painter's work is unique, as is also his method. In order to get his subjects the artist goes many feet below the water in a diving suit. The pictures are very beautiful, the colors being true to the wealth of loveliness within the sea. Men and women of artistic prominence, painters, musicians, literateurs, actors, educators and statesmen, all have most grateful things to say of Mr. Pritchard's work. Among these are Sarah Bernhardt, Zona Gale, Jack London, Emma James de Gorgoza, David Starr Jordan, Mary Helen Carlisle, and a score or more of others who have expressed their appreciation in interesting notes of thanks. Professional divers who have seen the pictures are enthusiastic in their praise of the paintings which so truthfully depict the water world...”