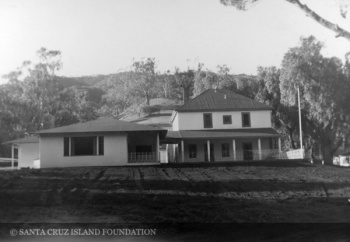 Phoenix House, Santa Cruz Island is one of two important houses at the Main Ranch. It was designed in 1950 by architect H. Roy Kelly for Edwin Stanton after a fire destroyed an original wooden ranch house in its location, hence the building’s name. It is a simple single story wood frame building with stucco exterior which contains a large formal living room and fireplace complete with wet bar, and two bedrooms with separate baths, formerly the rooms of Edwin and Evelyn Stanton. Outside the building’s east exit, which leads to the swimming pool is Polly’s Porch, named for Stanton family friend, Polly Goodan. Outside the west exit, the Phoenix House is connected by a covered porch to the Justinian House.