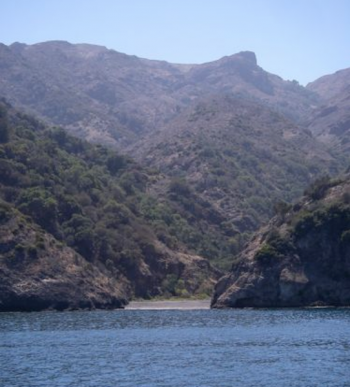 Platt’s Harbor, Santa Cruz Island (Dick's Cove, Dick's Harbor) is the next adequate anchorage on the north side of the island to the west of Twin Harbors, with Orizaba Flats in between. It is thought to have been named for U.S. Coast Survey employee, J. F. Platt, not known to have visited the island. It is also the name of a survey station established by William E. Greenwell and his aid, Preston C. F. West on Tuesday, July 21, 1857:

The horizontal coordinates were established by classical geodetic methods and adjusted by the National Geodetic Survey in June 1996.

Dick’s Cove inside the harbor was used historically as a camp location. The place name appears on Forney’s 1875 island survey map. This place name and triangulation station appear on the Santa Cruz Island Sheet B topographic map.

1886: Ornithologist Eli Whitney Blake, Jr. reported on the distinguishing characteristics of the Santa Cruz Island flicker. Blake visited Santa Cruz Island twice in 1886: on July 4-24, 1886 and again August 6- September 3, 1886. On his first trip, he noted “Santa Cruz Island is owned by a stock company and is used as a sheep ranch; the herders constitute the only human inhabitants... Our camp was in a canyon near Platt's Harbor, on the northern side of the island.” » Summer Birds of Santa Cruz Island, California in Auk 4: (328-330) 1887; Nesting Habits of Empidonax insulicola in Auk 14: (405-406) 1897.

June 29, 1931 [SBMP]: “Four persons saved their lives when they jumped off their disabled yacht, Typhoon, as it was pounded to pieces on a reef off Platt’s Harbor, Santa Cruz Island, by a tremendous sea early yesterday morning. Out of gasoline, the jib sail torn to shreds and a 60 pound anchor almost useless against the tremendous swells, the boat was carried more than a mile down the rugged coast. On the boat were Mr. and Mrs. Frank C. Learned and J. E. Knowles and Miss Elizabeth Bakewell. They were rescued by members of the crew of Major Max C. Fleischmann’s Haida, after a 12-hour vigil from a cliff-bound stretch of beach. Nothing of the boat was saved.”