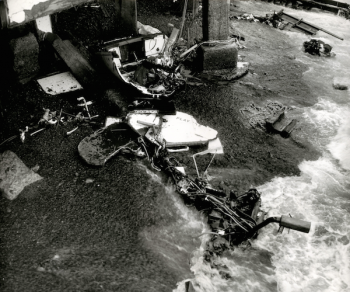 January 21, 1966 [San Bernardino Sun]: “Windstorm Points Up Need For Catalina Breakwater. By Almon Lockabey. It's nothing short of ironic that the windstorm which destroyed so many small boats at Avalon early this week came just a little more than 24 hours before the Small Craft Harbors Commission was to hear a formal presentation by the City of Avalon seeking a $1,274,000 construction loan for the development of a protected small craft harbor at the island resort. It can only be hoped that the destruction of some quarter of a million dollars in boats will hasten the negotiations as well as the actual development of the proposed breakwater. Santa Ana type winds are famous for striking without warning — and Avalon has absolutely no protection from such blasts...”