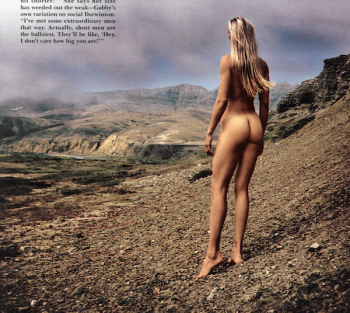 Superjock, Gabrielle Reece, on Santa Cruz Island. Filmshoot at the invitation of The Nature Conservancy, December 2000

December 15, 2000 [SBNP]: “Jock gets in touch with nature on Santa Cruz Island. Playboy on Santa Cruz: Readers of the January issue of Playboy will notice that superjock Gabrielle Reece used Santa Cruz Island as a nude romping place, sans volleyball outfit, sans everything except what nature provided her. Au natural in nature. In return, the non-profit Nature Conservancy, which owns 76 percent of the island (the National Park Service owns the rest) got a fee. Conservancy folks haven't confirmed how much, but said their normal photo shoot fee is about $10,000. This, Conservancy spokeswoman Liz Riley told me, is "not an endorsement of Playboy." ”