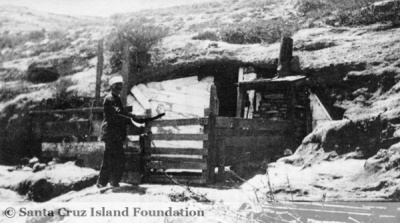 Exterior of Santiago's cave and an unidentified man. The wood served as a door to the cozy residence. Photo c. 1897 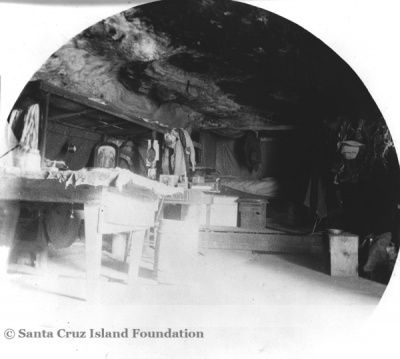 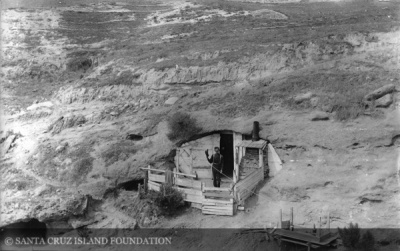 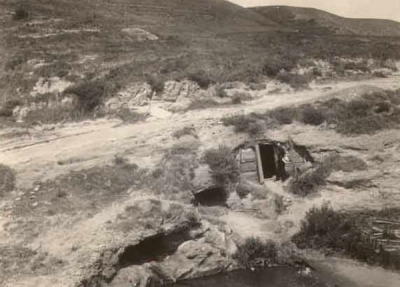 Santiago's Cave beneath the road.

Quintero was naturalized as a citizen on October 9, 1863. Shortly thereafter he became a resident an employee on Santa Rosa Island from at least 1864, through More's 1893 death, and until at least 1908. He was present at the time of the 1884 shooting death of the Chinese cook, Ah You by A. P. More, and he testified at the trial that More ordered him to “turn the body over and take the knife away.”

Others on the island are:

September 1, 1882 [LAT]: “Santiago Quintero published a wager of $100 in the Santa Barbara Press that José Marillon Valenzuela is the best rider of wild or bronco horses that there is in the State. Señor Quintero fixes Christmas eve as the day for the trial. Now is an opportunity for our horsemen to show their nerve and prowess. Nowhere in the world are there more daring, skillful and perfect equestrians that west of the Rocky Mountains, and there are few who can excel the native Californians in this particular. This challenge will doubtless have the effect of simulating some exceedingly lively competition among the men who cinch the girth and buckle the rein.”

September 6, 1882 [LAT]: “The Times published recently a wager of Mr. Santiago Quintero, of Santa Barbara, to the world that José María (not Marillon, as published) Valenzuela is the best rider of wild or bronco horses in the State. The bet in its very wording being so full of confidence, and being, too, so comprehensive, a Times commissioner called on the genial Nick Covarrubias at his stables on Main Street to learn something about Mr. José María Valenzuela, in whose excellence as a rider Mr. Quintero has so much faith.” Have you seen the challenge of Mr. Santiago Quintero published in the Times, Mr. Covarrubias?” “I have, and I know both Mr. Quintero and José María Valenzuela. Valenzuela is, in my opinion, one of the very best riders in the world. He is a vaquero of about 40 years of age. He’s quite tall, standing fully six feet high, if not more. As a rider of bucking horses he has not his superior in the land. He sits a horse with the most perfect ease and grace you can imagine. His skill is such that he coolly wraps and smokes a cigarette while his horse is bucking…”

February 13, 1897 [LAT/SB]: “Witnesses in the case of Fred Forbush vs. John F. More told in the Superior Court this morning how they had worked for over a year without any wages when in the employ of John F. More, the subsequently disposed administrator of the A. P. More estate, and manager of Santa Rosa Island. Two island ranch hands testified this morning, and the case was then continued until March. Felipe Santiago Quintero and his grandson, Frank Edwards, assigned their claims to the plaintiff in this action. Edwards claims to have worked on the island from April, 1895 until June 1, 1896, when Mr. More was succeeded by Mrs. Miller as special administratrix without receiving a cent of payment. Thought the amount involved in the suit is not large, there is considerable interest shown, and several attorneys are engaged. What Mr. More’s defense will be is not learned, as he was not present today, and it was on this account that further hearing was postponed.”

February 14, 1897 [LAH]: “Fred Forbush, Assignee vs. John F, More; an action for wages alleged to be due laborers on Santa Rosa Island. Plaintiff called Felipe Santiago Quintero and Frank Edwards who testified that: they had worked on the island under the employ of the defendant and had assigned to Fred Forbush their claims for such services. The case was then continued until the 2d proxime.”

June 16, 1897 [SFWC]: In 1897 Santiago was described by Gustav Eisen: “The strangest man of the few who live on Santa Rosa Island is Santiago Quinteros. But Santiago might also be said to be one of the strangest men in the country. He is a hermit from choice and lives in a cave because he would rather live there than any other place in the world. Santiago is a man of some means and also earns some money from the estate, but he often spends months in his cave without seeing a person. He has a couple of dogs who live in small caves near his, and altogether they are a happy family. Santiago’s Cave is a natural hole in the rock, with the front boarded up and fixed with a door. He has a stove and plenty of good furniture, so that he is absolutely comfortable. He has lived alone in his cave for over 30 years.”

September 25, 1899 [SBI]: “Santiago [James B.?] Quintero was brought over from the islands yesterday in a supposedly insane condition, but he was only suffering from an illness and is again all right.”

February 21, 1905 [SBMP]: “Hermit of Santa Cruz [Rosa] Island. A man has lived on Santa Cruz Island for a number of years in almost complete solitude. Of the hundreds who annually visit the island, few, if any, catch a sight of the dwelling. Some have seen the man himself, for he comes forth occasionally to purchase food or tobacco, but he dwells for months at a time without seeing human kind. It is said that he has been there at least seventeen years. There is a road across the island which passes directly over the house, but one passing that way would not know where it was located unless he were told. By cutting the top of the entrance away, says Oxnard Courier, he formed an arch, even this requiring but little labor. The opening was then closed by boards and braced or supported by scantling, two uprights forming a door; all being neatly whitewashed. On one side of the doorway a chimney was built of adobe bricks and mud, being on the outside, after the fashion of the chimneys seen in Virginia. The top portion is a modern iron stove pipe, but a little roof of shakes is built out from it to keep the rain from the mud, brick and stone chimney. The earth has been leveled twelve feet out from the door and enclosed with a fence, having a gate, all neatly whitewashed. Such is the case house of a modern islander, whose dwelling is a cross between an ancient cave dwelling and a modern shanty. Earthquakes—and some heavy ones—have shaken the island, but have failed to affect it; its roof is the solid cliff partly beneath the roadway; and so far as creature comforts, the occupant is contented in perhaps the strangest home of a white man in this country.”

February 28, 1908 [SBMP]: “Pacific totem poles. Santiago Quintero, an old Mexican who lives most of the time on Santa Rosa Island, stated last time he was in town that he remembers an immense pole quaintly carved standing on the island... Quintero was for carrying the pole off 45 years ago and setting it up somewhere in Santa Barbara, but the late Alexander More, then owner of the island, would not hear of such a thing...”

March 2, 1908 [SBMP]: “Santiago Quintero, an old Mexican who spends most of the time on [Santa Rosa] island, stated recently that he remembers an immense pole that was quaintly carved. Feathers at one time adorned the head, and the quills were still sticking out of the wood. Quintero wanted to bring the totem pole to the mainland, but the late Alexander More, then owner of the island, would not allow that to be done.”