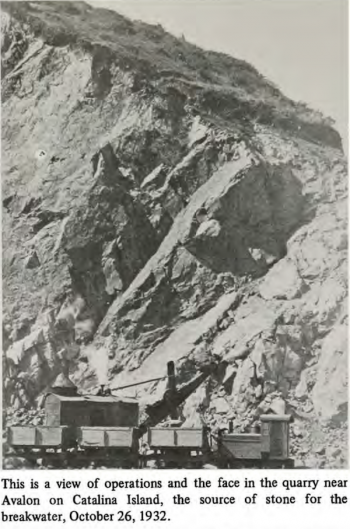 September 19, 1885 [LAT]: “Loss of life. A terrible affair on Catalina Island yesterday. A frightful accident took place yesterday morning on Santa Catalina Island, at the quarries from which stone is taken for the breakwater at San Pedro. As nearly as can be learned, a charge was fixed for a blast, but failed to explode. The workmen went up to tamp the load, when the bank caved (whether by explosion of the blast or not could not be learned)… Both victims came from San Francisco…”

January 16, 1898 [LAT/SCat]: “A.M. Jennings of New York, a builder of breakwaters and jetties, who expects to bid on the San Pedro Harbor work, chartered the Paloma Monday, and, accompanied by John Lesher of Baltimore, visited San Clemente to inspect the rock there. They also went to Empire Landing to view the Catalina quarries.”

January 29, 1898 [LAT]: “Major Charles E. L. B. Davis of San Francisco, the government engineer who will open the bids for the San Pedro breakwater on February 10… has been anxious to visit the islands of Santa Catalina and Clemente for a personal inspection of the rock to be found at those quarries… On Thursday he chartered La Paloma, and accompanied by six contractors and J. B. Banning, left Avalon for Clemente at 7 A.M. The party landed at Gallagher’s…”

January 30, 1898 [LAT/SCat]: “Avalon. Bidders on the proposed breakwater at San Pedro are coming over every day to visit the quarries at Catalina and Clemente…”

April 9, 1899 [LAT]: “The [San Pedro] harbor rock. Quarry from which the San Pedro breakwater will be taken… The bidders for the construction work were mostly strangers to this locality and learning that there was an abundance of rock on San Clemente Island, which, being a government possession, was offered to them free of cost, some very low bids were made. The free rock proposition of San Clemente proved delusive in that the stone of the proper requirements was so scattered that it entailed a large expense to collect it… After an exhaustive search on the mainland, the harbor contractors have finally selected a point on Santa Catalina Island near the isthmus…”

April 28, 1899 [LAT]: “Breakwater rock. How it will be quarried and brought from Catalina… After an exhaustive search on the mainland, the harbor contractors have finally selected a point on Santa Catalina Island near the isthmus, about a mile east of the mouth of the isthmus bar…”

August 20, 1899 [CT]: “Santa Catalina Island a private kingdom… At another point on the island, Empire Landing, is the ancient olla, or stone jar, manufactory of the Catalinans. This quarry was the one which it is believed supplied the ollas, not alone of the island, but for the entire district of southern California. No other quarry ever has been found along the Pacific coast. The Indians cut the ollas from the solid stone with quartz chisels, and circles are visible that show the markings made preparatory for the cutting…”

October 3, 1899 [LAT]: “Harbor work. Contractors have difficulty in obtaining rock… A Times reporter was dispatched to the scene of operations at Santa Catalina Island, where J. S. Anunsen, superintendent of the quarry work, was found… We have met with some disappointments as, for instance, our attempt to find stone at San Clemente. We expended many thousands of dollars there and the prospects were quite encouraging when we were looking at the face of the cliff, yet after drifting a tunnel 125 feet we found little else than dirt ahead of us and had to abandon the place. The formation here in some respects is different, and I do not apprehend that this will run out. If the rock is here, we will get it…”

May 11, 1900 [LAT]: “Heldmaier would sell. Here to dispose of the San Pedro Harbor plant. New bids for breakwater work will be opened Monday… Mr. Heldmaier’s visit to Southern California at this time is for the purpose of advantageously disposing of the plant which the firm installed in connection with the harbor work. During the time Heldmaier & Neu held the contract, machinery barges and paraphernalia of various kinds for handling rock were placed in the harbor and at the quarry on Santa Catalina Island…”